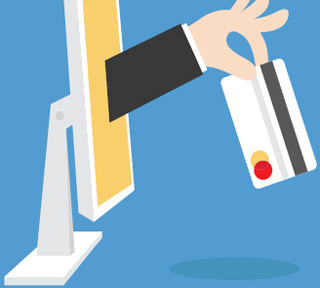 When she got her delivery earlier this month from the online retailer Coupang, Park Jin-young, a 27-year-old high school teacher, also received something unexpected from the delivery man: a handwritten letter.

In the note, the man introduced himself as a “Coupang man,” wished her a Merry Christmas and told her to stay warm this winter with the gloves and muffler scarf she bought.

“My order was around 50,000 won [$45],” she said. “But when I got the letter, I felt as though I became a special customer. The fact that no one sends letters anymore also makes them very special,” she said.

Besides sending personalized letters, “Coupang men” also text pictures of the parcel they leave at a house if the customer is not there so that he or she can easily find it later. When delivering diapers or other baby products, the delivery worker will text the receiver to check if it is OK to ring the doorbell in case the sound would wake a sleeping baby. 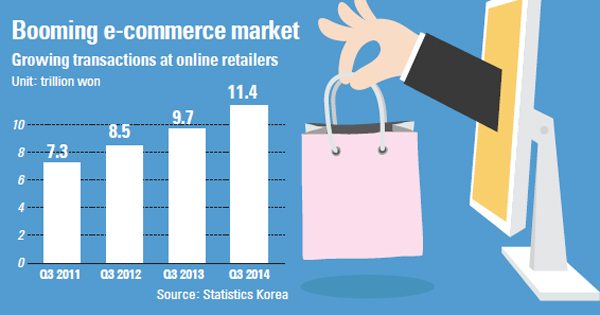 There are a number of favorable reviews of Coupang’s delivery service on Web forums and blogs - including from one person who received a surprise gift of balloons and chocolate from a delivery man ahead of Christmas.

These personalized touches capture the essence of how online retailers are striving to gain an edge over their competitors now that the initial phase of spectacular growth in the e-commerce market is over. There are e-retailers such as large B2C open markets like G-Market and 11st, daily deals sites, shopping malls affiliated with department stores, home shopping networks, discount supermarkets and private online malls run by small merchants.

The retailers are trying to provide something more than just great deals. Some are focused on improving their delivery system while others are offering unique services to keep customers loyal and engaged.

Coupang is leading the pack for customer service, after evolving from a daily deals site into a more typical e-commerce site.

In March, the retailer launched its own delivery system with logistics centers across the country. The system promises same-day deliveries on orders placed before noon.

Instead of working with a third-party logistics company, Coupang hired 700 delivery workers as regular staff to make sure packages get to their destinations on time.

Coupang said that using their own delivery system and staff has been a great way for them to make an emotional connection with their shoppers.

“But we don’t think that’s always the case. Even though people order items with advanced technology, they are still impressed by something that contains a personal touch, such as handwritten letters.”

Jeong said that all Coupang staff members, including its delivery men, write short letters to customers every day to go along with their delivery items.

After the new service was implemented, monthly transactions on the e-commerce site reached a record high of 205.6 billion won last month.

Interpark takes a similar approach, but with a focus on selling books. The retailer sends positive messages about its products written by users and subscribers to people who buy its books.

“We believe that this kind of small thing can make consumers feel good for a moment,” said Oh Ji-yeon, a marketing manager at Interpark. “When they get such messages, many of them post about what they bought on their blogs or on Facebook so we can also expect some publicity from that.”

The intense competition is due to saturation in the e-commerce market, but the number of transactions made at online malls is increasing.

Transactions in the third quarter were worth 11.4 trillion won, a 17.8 percent increase over the same period last year.

But many businesses are trying to take their share. Along with a variety of bigger e-commerce sites, there are about one million private online malls, according to industry sources.

Cafe 24, one of the largest Web hosting companies, said that it has 750,000 shopping malls registered as clients and the number has grown by an average of 20 percent per year since the mid-2000s.

The market size of small online shops has greatly increased. They took in an estimated 8.7 trillion won in total last year, according to Statistics Korea. In 2010, the market was valued at 6.2 trillion won. The growth of private malls has been a warning to large e-commerce sites.

The issue is being compounded by the declining number of buyers at big retailers and the frequency of purchases made on those sites.

The percentage of Koreans aged over 12 who had used an online malls last year decreased to 50.4 percent from 64.5 percent in 2011 and 60.6 percent in 2008, according to SDINomics, a private economics and business research institute. The frequency dropped to 1.2 visits per month last year from two in 2010 and 1.8 in 2008.

The data shows that the value of online transactions is rising not because the number of users is increasing but because shoppers are making bigger purchases.

This has pushed large discount shopping malls to fight to develop more efficient ways to get goods into the hands of their consumers.

E-Mart opened a logistics center dedicated specifically to its online platform, E-Mart Mall, in September, making it the first distribution center built by a large retail chain specifically for an online mall. The building of the large center in Yongin, Gyeonggi, is aimed at increasing the number of items that it can deliver on the same day from 55 percent to 70 percent.

Lotte Super followed suit earlier this month by setting up a logistics center in Gangnam District for online shoppers looking to purchase fresh produce. Lotte Super promises a three-hour delivery within the district and said that it will extend the new system.

Online retail giants G-Market and Auction, both operated by eBay Korea, are trying to cut customers’ delivery fees, setting up a section in which customers are not charged delivery fees even if the items purchased are from different merchants. G-Market and Action used to charge delivery fees separately depending on the seller.

Other companies are entering a new business area where there is less competition.

Online retailer WeMakePrice launched a shipping service called WeMakePrice Box for people who shop overseas and said it would refund customers if any items in the box were damaged.