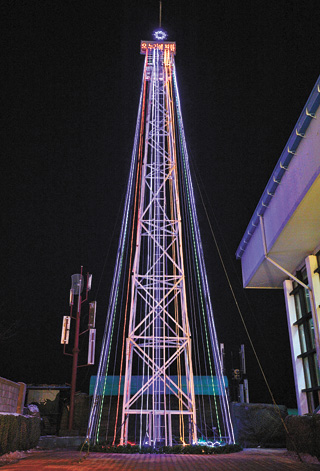 The tower at the inter-Korean border, once used as a festive Christmas display, was torn down. [JoongAng Ilbo]

A local Protestant group said Thursday that it has ditched plans to erect a giant tower at the inter-Korean border to be used for a festive Christmas display.

The announcement comes weeks after North Korea lashed out, claiming that the proposal for the new tower was a “severe provocation” of war.

The new structure would have served as a replacement for a recently dismantled tower that formerly sat atop Aegibong Peak in Gimpo, northern Gyeonggi, and used to illuminate the demilitarized zone (DMZ) for decades during the Christmas season.

“Despite our pure intentions and motive, our Aegibong Christmas tree was misunderstood as only intensifying friction between the North and the South - and to be causing conflict domestically between conservatives and progressives,” said Hong Jae-cheol, an official with the Christian Council of Korea (CCK).

The organization planned to install an artificial, tree-shaped structure on Aegibong Peak and illuminate it for the holiday season, starting on Tuesday until Jan. 6.

The 18-meter (59-foot) steel structure previously decorated with Christmas lights had stood there for decades, to the annoyance of the North, before it was removed by the government in October for safety reasons.

Officials feared the rusty installment might be toppled by strong winds.

When the CCK asked the Ministry of National Defense, which managed the structure, to build a similar tower for the upcoming holidays, it granted the group permission on Dec. 2, citing religious freedom.

But the two stood at odds over the height of the Christmas tree, located just three kilometers (1.8 miles) from North Korea. The CCK wanted to build a 23-meter tree on the 165-meter peak, whereas the military allowed it to be nine meters maximum.

“The CCK hoped others saw the tree installment as a Christian event for peace and love,” Hong said in a press conference on Thursday, adding that he hoped it contributed to reconciliation between the South and North.

Next year, the CCK will decide whether to make a second attempt to erect a Christmas tower after negotiations with the Gimpo city government, said Lee Yeong-hun, the head of the council.

“If possible, we will also try to confer with North Korea,” Lee said.

The decision to scrap the project was reached internally and was not discussed with the local government in advance, Lee said.