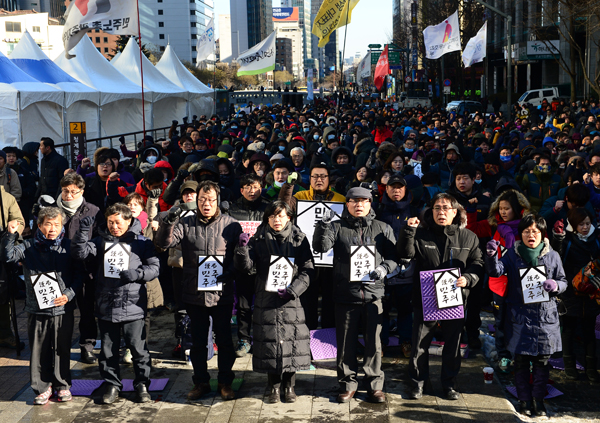 Lee Jung-hee, fourth from left, former chairwoman of the now-disbanded Unified Progressive Party, stages a protest rally with members of civic groups at Cheonggye Plaza in central Seoul Saturday over the Constitutional Court’s ruling on Friday to dissolve the leftist party. [NEWSIS]

Six out of 10 people supported the Constitutional Court’s decision to dissolve the Unified Progressive Party (UPP), a poll showed Sunday, while the members of the now-disbanded leftist minority party vowed to fight against the ruling.

The JoongAng Ilbo conducted an opinion poll on Friday and Saturday of 1,000 adults nationwide after the Constitutional Court granted the Park Geun-hye administration’s petition on Friday to dissolve the Unified Progressive Party for its pro-North Korea doctrine and removed all five of its lawmakers from the legislature.

According to the poll, 63.8 percent of the people said they support the decision, while 23.7 percent said they disagree. The rest said they did not have an answer or did not respond.

“Even for the people who think they are progressive, the UPP’s activities were too much to swallow,” said Yang Seung-ham, a professor of political science at Yonsei University.

According to the poll, the court’s decision to strip the UPP’s five lawmakers of their seats was supported by 55.8 percent of people. Another 38.8 percent said that the lawmakers should be allowed to serve in the National Assembly without being affiliated to a party since they were elected by voters.

The politicians whose seats were taken away said Sunday that they will file a lawsuit to challenge the decision. In a press conference, they argued that there is no legal ground for the Constitutional Court to remove them from the National Assembly. “A lawmaker is a constitutional entity elected by voters,” Oh Byung-yun said as he read the statement. “To take away the lawmakers’ seats based on their party affiliation, the court should have cited a stipulated legal ground.”

While there was no law to specify what the fate of the lawmakers should have been, the court stripped the five UPP representatives of their seats, stating that keeping them in the legislature would be tantamount to maintaining the party.

The UPP had five lawmakers - Oh, Kim Mi-hyui , Kim Jae-yeon, Lee Sang-kyu and Lee Seok-ki. Lee Seok-ki is currently under detention on charges of treason. The other four lawmakers attended the press conference on Sunday.

Oh pointed out that the ruling contradicts the court’s earlier argument.

“A 2004 publication by the Constitutional Court said lawmakers do not lose their seats when a political party is dissolved,” Oh said.

The former UPP lawmakers added that the constitution, which was amended by Park Chung Hee after his military coup, once stipulated that lawmakers would lose their seats when their political party was disbanded, but that the current constitution, revised after the 1987 democratization, does not have such a clause.

“In this era of Park Geun-hye, the Constitutional Court made a ruling based on the Park Chung Hee-era constitution,” Oh said.

President Park Geun-hye is a daughter of the late strongman Park Chung Hee who ruled the country from 1961 until his assassination in 1979.

Former UPP members, as well as progressive civic groups, rallied at Cheonggye Plaza in central Seoul over the weekend and demanded Park’s resignation. The police said about 800 people participated in the rally, while the organizer of the protest, the Korea Alliance for Progressive Movement, said 2,000 people attended the event on Saturday.

“Park and her followers probably think they had succeeded in assassinating her opponents,” Lee Jung-hee, former chairwoman of the UPP, said. “But for us, this is just a beginning.”

North Korea also commented that the dissolution of the UPP is “yet another heinous political provocation” against the Communist regime.

The Blue House threw its full support behind the Constitutional Court.

“It is a historic decision that firmly defended liberal democracy,” President Park was quoted as saying by her chief public affairs secretary, Yoon Doo-hyun. 