Gov’t has a sunny outlook

Gov’t has a sunny outlook 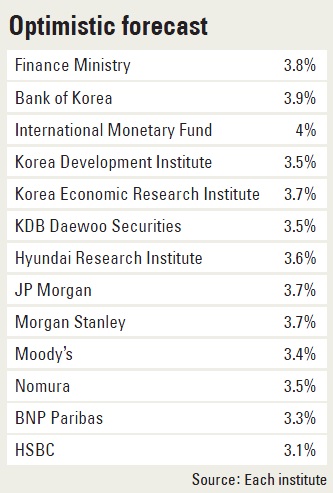 Once again, questions are being raised over whether the Korean government is being too optimistic in its economic outlook.

Since 2011, the government’s economic growth projections have consistently missed the mark, leading to concerns that the government is not in tune with actual market sentiment.

Citing the gradual global economic recovery, the Ministry of Strategy and Finance on Monday announced a 3.8 percent growth outlook for next year. This is a drop of just 0.2 percentage point from its earlier forecast of 4 percent in 2015.

“Next year’s growth will be 3.8 percent thanks to export expansion on the back of the global market’s recovery, falling crude prices, larger fiscal spending and various [government] policies including investment stimulus,” the Finance Ministry said in a report.

The forecast is lower than the growth predicted by the Bank of Korea, which projected 3.9 percent growth, and the International Monetary Fund, which expects 4 percent, but those projections were released in October.

In fact, BOK Governor Lee Ju-yeol on Dec. 11 said that under the current economic circumstances, it is inevitable that the central bank will have to adjust its outlook.

Global markets besides the United States - which has started to normalize its monetary policies - look gloomy due to uncertainties, including slow growth in China and Europe.

There have been doubts over whether the Korean economy can improve as its biggest trading partner, China, is expected to struggle with its low growth next year.

Many major financial and research institutions have predicted that Korea’s economic growth will settle at about 3.5 percent, while HSBC and BNP Paribas are aiming even lower.

Before October, most of those institutions forecast an average growth of 3.8 percent.

But many have been lowering their outlook as Korea’s exports, which are a large contributor to the nation’s growth, have started to fall.

HSBC gave the lowest outlook of all financial and research institutions. The bank projected Korea’s growth outlook for 2015 at 3.1 percent.

Ronald Mann, an economist at HSBC, said Korea’s exports will likely be damaged by the slowing Chinese and European markets as well as the yen’s depreciation. Mann also said that the domestic economy would continue to struggle.

BNP Paribas had the second-lowest outlook among all financial institutions, projecting 3.3 percent.

The biggest problem of an overly optimistic outlook is that it will affect other assessments including tax collection and budget allocation.

In the past three years, the government’s optimistic forecasts have resulted in a serious shortage of tax collection.