The production rate of food items typically enjoyed by children is slumping as the country’s low birthrate reduces the demand for dairy products, ice cream and snacks.

Since 2001, Korea’s fertility rate has been locked in at 1.3 births per woman or lower, the bottom of the list among Organization for Economic Cooperation and Development (OECD) countries.

Against this backdrop, various milk products have seen a drastic decline in demand and production and have been affected by multiple factors, including shifting consumer trends and high price tags as well as the shrinking birthrate.

The volume of powdered milk produced until the third quarter of this year decreased by 15.6 percent, compared to the same period a year earlier, according to data released on Monday by Statistics Korea. 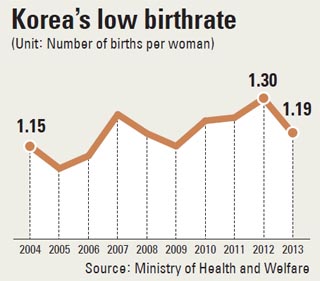 Since powdered milk is primarily used to make infant formula and confectionery products, experts and industry sources say its declining production is linked with lower demand caused by the shrinking number of children, the largest consumers of these items.

And even with the lower production rate, the country’s stock of powdered milk is at a 12-year high - another sign of the slumping demand.

Back in June, the amount of stored powered milk reached 15,554 tons, the highest level since November 2002, according to the Korea Dairy Committee, which represents farmers and other people involved in the dairy industry.

“We have long worried about the low birthrate,” said a member of the Korea Dairy Committee who refused to be named. “Because one of the largest consumer groups were mothers with infants, they purchased infant formula … But with less mothers with babies, they have fewer reasons to buy powdered milk.”

Milk production also suffered. Statistics Korea found that the volume of milk released to the market dropped by 1.8 percent in the third quarter compared to a year earlier.

Milk is not as popular as it once was due to increasing prices and alternative choices such as almond milk or black bean soy milk.

Sales of dairy products at E-Mart, for example, declined 4.3 percent in August compared to a year ago.

Yogurt products made out of fermented milk, a popular dessert for children, are also being affected.

The production of fermented milk in the first three quarters fell from 429,284 kiloliters (113 million gallons) to 390,070 kiloliters, 9.1 percent less than the same period last year.

Major dairy companies are feeling the pain of the dropping popularity of their milk-based items.

Namyang Dairy Products, the nation’s No. 2 dairy producer, suffered losses in its operating profit for the first time in 2013. This year, Namyang continued to post a negative operating profit until the third quarter.

Market analysts say that the declining demand for dairy products can be attributed to the company’s downbeat performance, though a scandal in 2013 where a Namyang representative was recorded insulting an elderly store owner when he refused to buy more milk also led some consumers to turn their backs on the business.

Other foods favored by children are seeing a disappointing performance. The production of ice cream was down 5.1 percent in the third quarter compared to a year earlier.

Analysts expect that sales of ice cream products by Binggrae remained largely flat in the third quarter at 29.9 million won, compared to 29.6 million won year-on-year. The growth rate of Binggrae, a major ice cream and confectionery company in Korea that produces the popular banana milk products, decreased by 1 percent last year compared to 2012. Based on sales and operating profits so far, this year won’t see any difference.

The production of snacks through the first three quarters edged up by 0.7 percent.