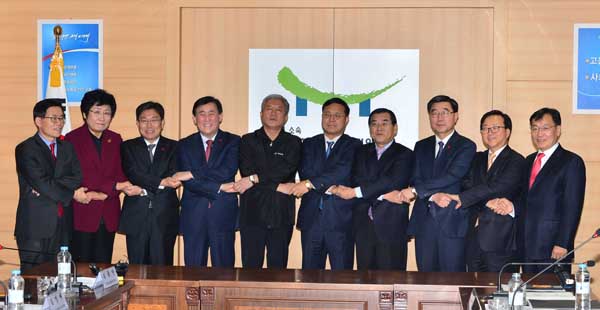 A commission representing the government, labor and management has reached an agreement on the principles and direction of reforming the labor market that the Park Geun-hye administration has been pushing.

The Economic and Social Development Commission agreed upon the need for structural reforms in order to overcome Korea’s economic malaise amid growing global uncertainties and to better prepare for the future.

The committee comprising 10 members from the government, the lobbying group of the Korea Employers Federation and the Federation of Korean Trade Unions, one of the country’s two umbrella union groups, met on Tuesday and agreed on five agenda items and 14 smaller projects.

The five agendas are: improving the dual structure of the labor market; resolving pending issues including wages, working hours and the retirement age; enhancing the partnership of the participants; improving the social safety net; and introducing structural reforms including productivity improvement.

The so-called dual structure of the labor market, which is the disparity between conditions for salaried and contract workers, has been considered one of the major problems in the nation’s labor market.

The 14 smaller projects include measures to improve regulations to avoid discrimination against contract workers, extending the retirement age and sharing growth between conglomerates and small and midsize companies.

The three parties will be discussing three of the five agenda items first, including the dual structural problem of the Korean labor market, reducing labor hours and the establishment of social safety nets. They hope to reach a final agreement in March.

The agreement on Tuesday will help Choi Kyung-hwan, the minister of strategy and finance, and his economic team push forward with the labor reforms, which he calls essential to ensure future growth of the nation.

“This agreement shows that all parties are on the path of agreement for future-driven labor market reform,” said Kim Dae-hwan, chairman of the Economic and Social Development Commission.

After the agreement, Minister Choi said although there will be some difficulties in agreeing on the details, the government will aggressively pursue the issues such as the establishment of a social safety net.

Tuesday’s agreement is also expected to further support the government’s reforms for contract workers, which it plans to announce between Dec. 29 and 30.

The government has recently outlined its reforms of labor laws, which concentrate on improving conditions for nonsalaried or irregular workers.

The goal is to give more job security to contract workers, whose plight has been depicted in the recent Korean TV drama “Misaeng,” or “Incomplete Life,” which was wildly popular.

The show, based on a popular webtoon of the same name, follows protagonist Jang Geu-rae, who is hired as an irregular employee at a major Korean conglomerate. Just short of two years into the job, Jang is forced to leave the company because the law would have required him to be put on staff. The show resonated with many viewers and the job insecurity that many Koreans feel.

Under the government’s proposals, any contract worker aged 35 or older will be guaranteed a job for a maximum of four years if he or she wishes to stay with the company.

The current law only allows contract workers their jobs for two years.

If a contract worker is let go after the four-year guarantee, he or she receives severance pay and an additional payment to help find a new job.

The government wanted to pair the new regulations on contract workers in the way that salaried workers are paid, which it considers overly protective. Instead of automatic raises reflecting their years of service, workers would get raises based on performance.

But those reforms were resisted by labor groups. “Initially the government was planning to push a bold plan that would reform the overall labor market,” said a government official. “But as it was difficult to get agreement with the other parties, the government decided to announce a comprehensive irregular worker plan before the end of the year.”

The government will also accept a proposal for labor unions to get involved in situations where contract workers do the same work as salaried workers but get paid less and get no benefits.

Contract workers who have felt discriminated against can submit their complaints to the National Labor Relations Commission. But that has inhibited people from making complaints. In “Misaeng,” protagonist Jang Geu-rae doesn’t complain even though he is in that situation.

The government is also hoping to boost government unemployment payments from three months to four months. Legal working hours - including working over the holidays - will gradually be lowered from 60 hours to 52 hours per week. The government’s proposal for contract workers will obviously cost companies. But it’s part of a broader initiative to also bring reforms to public pensions, the financial market and the education sector.

It considers labor reforms the most urgent.

“[Companies] today are hesitant in investing in the domestic market and refrain from hiring, resulting in a growing number of irregular workers,” said Finance Minister Choi while announcing the government policy direction on Monday.

“As a result, we are stuck in a vicious cycle where young people have trouble finding proper jobs.”

His point was that unless well-paid jobs are created, it will be difficult to expect an economic recovery.

But reform of the labor market will inevitably face opposition from either corporations or labor unions, and sometimes even both. To get support from the public, the government has come up with the “Saving Jang Geu-rae” law.

It is already clear that companies face additional labor costs. Once severance pay is given to people who worked for a minimum of three months, companies are expected to have to pay an additional 5.4 trillion won ($4.8 billion) each year. Based studies from 2012, there are more than two million people who are working under contracts of three months or shorter.

The strongest opposition is expected from small and midsize companies.

“We understand the intention of the government to improve the quality of work,” said Ryu Ki-jeong, director of social policy at the Korea Employers Federation. “But it is worrisome as an excessive burden on companies.”