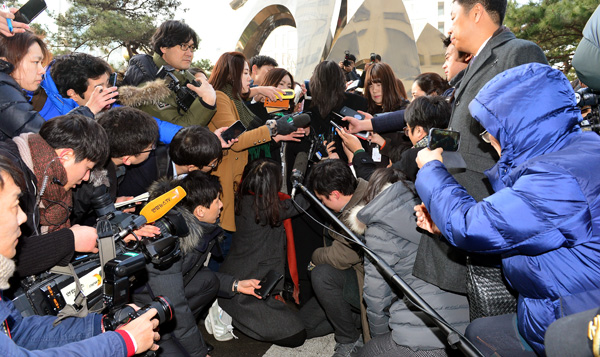 Cho Hyun-ah, former vice president of Korean Air, buries her head to avoid showing her face to reporters Tuesday after she attended a court’s review session for a pre-trial arrest warrant filed against her by prosecutors. [NEWSIS]

Cho Hyun-ah, the former vice president of Korean Air whose nut-rage tirade earned her international ridicule, attended a court review session Tuesday for a pre-trial arrest warrant, putting her on the verge of being sent to jail.

The court was still deliberating on the request as of press time.

A tight-lipped Cho appeared at the Seoul Western District Court Tuesday morning with her face deeply buried in her hair before an army of reporters. Following an hourlong questioning by the judge who will make the judgment on the arrest warrant, Cho remained silent when she was escorted by female law enforcement officials to the prosecutors’ office to wait for the court’s decision. On the way, the sound of her sobbing was heard by reporters.

Prosecutors submitted the warrant request six days earlier. They maintain the 40-year-old former executive should be put behind bars ahead of indictment because she sought to destroy evidence in the case and coerce crew on the now notorious Flight 86 from New York to Incheon on Dec. 5 to lie about the incident.

Prosecutors sought an arrest warrant for Cho, the eldest daughter of Cho Yang-ho, chairman of Hanjin Group, which owns Korean Air, on charges that she violated the Aviation Safety Law by ordering a plane back to the gate at New York’s John F. Kennedy International Airport to eject the cabin manager following a dispute about the way the macadamia nuts were served in first class. Prosecutors also suspect the former executive in charge of in-flight cabin services pressured flight attendants on that flight to change their testimonies about what really happened and attempted to get rid of evidence that would work against her.

While it remained unclear whether Cho would spend New Year’s Eve in jail as of press time, it was suspected the court would give a green light to the prosecutors because of the gravity of the cover-up she was suspected of taking part in.

The nut-rage scandal has implicated another Korean Air executive, surnamed Yeo, who also attended the court’s review session Tuesday for a pre-trial arrest warrant for him. The 57-year-old official who also works in cabin services is facing charges that he pressured flight crews to give false accounts of Cho’s behavior and told his subordinates to delete flight records regarding the accident. The court was still deliberating on an arrest warrant for Yeo as of press time.

The prosecutors already arrested an official from the Ministry of Land, Infrastructure and Transport last Thursday on suspicions that he leaked investigation information to Yeo on multiple occasions before Cho was questioned by the ministry earlier this month.

While Cho’s tirade only caused an 11-minute delay for Flight 86, the scandal that followed it has cost her all her positions in her father’s sprawling group and made her the poster child for children of tycoons behaving badly.

The scandal has reinforced public opinion that family members of Korean conglomerates have a sense of self-entitlement, treat company workers badly and will pull any strings to avoid accountability for their poor behavior.