Inflation in Korea falls to less than 1%, lowest rate in 15 years

Inflation in Korea falls to less than 1%, lowest rate in 15 years 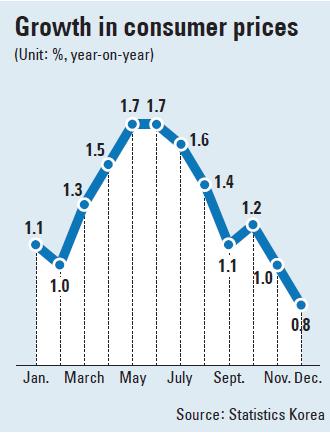 Korea’s consumer prices rose 0.8 percent in the last month of 2014 compared to a year earlier, the lowest growth in 15 years.

According to Statistics Korea on Wednesday, its consumer price index recorded 0.8 percent growth in December year-on-year. It was the first time that the index dropped below 1 percent in 14 months.

The annual inflation rate for the last year was 1.3 percent, unchanged from 2013.

Korea’s annual inflation rate has been declining since 2011 when it reached 4 percent.

One of the major causes of the drop in December was the plunge in international oil prices. Oil headed for the biggest annual decline last year since the 2008 global financial crisis amid a supply glut.

Meanwhile, the core inflation rate for 2014, a price growth index excluding volatile agricultural and oil prices, was 2 percent, rising from 1.6 percent in 2013. This shows that Korean CPI is highly dependent on imported oil prices.

Due to ample supplies of produce, agricultural prices plunged 10 percent in December compared to the same month in 2013, contributing to the 15-year low in inflation.

“It is likely that the rate might fall further, but there will be other factors affecting the rate, such as hikes in cigarette prices and discounts on gas bills,” an official at the agency said.

Despite growing concerns about low inflation and low growth, the government predicted a 2 percent increase in consumer prices this year and 3.8 percent growth in GDP in its economic projections announced on Dec. 22.

“As low inflation and low growth persist in the long run, deflation worries can amplify,” said Lee Jun-hyup, a research fellow at the Hyundai Research Institute.

“If oil prices keep decreasing, it can have a short-term effect on the Korean economy, but in the long term, it may affect our overall growth as oil-price decreases can increase jitters in emerging economies and the global economy,” said Kim Sung-tae, a research fellow at the Korea Development Institute.