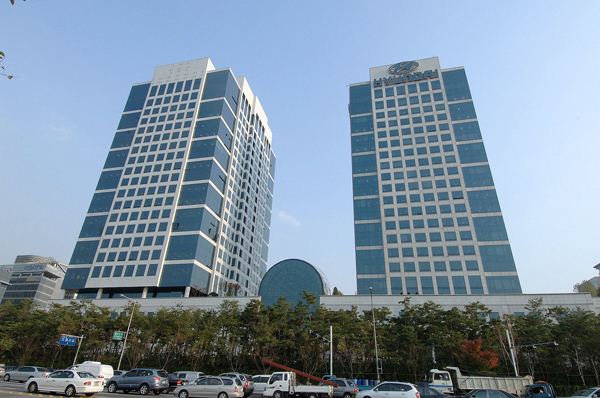 The nation’s leading automaker Hyundai Motor and its sister company Kia Motors have revealed their sales goals for 2015.

According to multiple sources in the auto group and the industry, the two are aiming to sell a combined total of 8.2 million vehicles globally this year, which is about 2.5 percent more than the companies sold in 2014, or 8 million. But industry insiders say the target set by the two auto giants is conservative, considering that the two have been hitting an average growth rate of about 10 percent for the past few years.

According to the industry, Hyundai aims to sell about 5.05 million cars this year, 1.86 million in country and 3.18 million cars overseas, while Kia, the second-largest Korean automaker, wants to sell 3.15 million cars, 1.71 million in Korea and 1.44 million units overseas.

An executive of Hyundai told the Korea JoongAng Daily on the condition of anonymity that the companies haven’t added last week’s sales to the figure, but that the number will likely be final because the annual record only includes vehicles delivered to their owners. He said the estimation included vehicles scheduled to be delivered by Wednesday.

The figure reflects that the two companies are growing at a faster rate than the global auto industry, which expanded by 3.9 percent from 83.83 million units sold last year to 87.1 million sold this year. 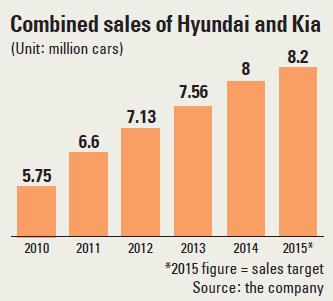 But industry insiders said it looks like Hyundai and Kia have their sights set on stable growth, due to current economic conditions including the depreciating Japanese yen and slow global economic growth, which have been a headache for most Korean manufacturers this year and are not expected to improve much next year.

Hyundai is set to introduce new vehicles next year and the model that the company expects to lead its sales is the best-selling small size sedan Avante, which will be unveiled at the Seoul Motor Show in April under its project name “AD.” It is the sixth-generation Avante and the first fully changed model in five years. In October, Avante became the first Korean car to reach 10 million units sold globally, 2.6 million in Korea and 7.4 million units in 177 other countries. Only 10 other cars, such as Toyota’s Corolla and Volkswagen’s Golf have achieved the 10 million milestone.

The new Avante is expected to stick to Hyundai’s family design Fluidic Sculpture 2.0, which was also used in the premium sedan Genesis and the LF Sonata.

The hexagonal grille that graces the front of the Genesis and LF Sonata is expected to be used in the Avante AD. Industry insiders said the engine will be improved from the current Avante’s 1.6-liter GDi.

After the Avante AD, the company will introduce its third-generation Tucson ix to meet the growing popularity of SUVs. It will also be a fully overhauled model after the second generation Tucson was released in 2009. Industry insiders said the new SUV will have features that are compatible with smart devices because the vehicle is aimed at customers in their 20s and 30s.

Kia Motors is looking to bring in customers with a new version of its best-selling mid-sized sedan K5 set to be released in the first half. It is the second generation of the vehicle after the first generation was released in 2010. 