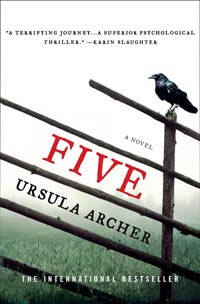 Geocaching, the contemporary treasure hunt in which a GPS is used to find hidden objects, lends itself to an intriguing mix of a gripping police procedural and an exciting update of the puzzle mystery in Austrian children’s book author Ursula Archer’s crime fiction debut.

Archer imbues “Five’’ with an inventive plot, tense suspense and fully realized characters that seem as if they have been around for years. Archer’s clever use of geocaching proves that the light puzzle mystery can be successfully incorporated into a hard-boiled novel with aplomb. An insider’s view of Austria, which is seldom used in U.S. mysteries, adds another welcome dimension to “Five.’’

The murder investigation of a woman, whose feet are tattooed with GPS coordinates, leads detectives Beatrice Kaspary and her partner, Florin Wenninger, to a box buried by someone involved with geocaching. Amid the trinkets normally left are human remains and a note with clues to a second site and another gruesome find. Soon, Beatrice and Florin, who are with the Salzburg State Office of Criminal Investigation, are led to more victims with clues hidden in geocache sites. The two cops know the murderer is using them as pawns in a sick game. But they are forced to play along as they try to discover what links the victims, who seem to have been strangers, and stop the killer.

Archer cleverly interlocks each puzzle hidden in the notes and clues found by the detectives that lead to a twisting, yet believable plot.

Beatrice is accused by her supervisor of being “jittery and distracted.’’ Well, of course she is. Her ex-husband constantly harangues her about custody of the children, a secret from her past rears during the investigation, and she is being contacted by the killer. Only Florin’s intervention keeps her on the case