Museum marks Year of the Sheep

Museum marks Year of the Sheep 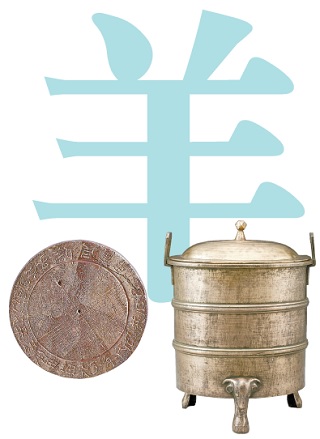 Left: A sundial from Korea’s Goryeo Dynasty (918-1392) featuring the 12 signs of the Chinese zodiac calendar. Right: A caldron used at royal rituals from Korea’s Joseon Dynasty (1392-1910). Provided by the museum

Sheep have been a rarity on the Korean Peninsula since ancient times. In fact, they are more prevalent in nomadic civilizations and look more similar to goats when they emerge in traditional Korean culture.

Nonetheless, sheep are traditionally an auspicious animal in Korea and the East. The Chinese character for sheep is often used in conjunction with other symbols that have positive connotations such as virtue and beauty.

As next year will be the Year of the Sheep - or Goat or Ram - according to the Chinese zodiac calendar, the National Folk Museum of Korea has prepared a special exhibition on the animal and its place in Korean history.

For the past 16 years it has become somewhat of a tradition for the museum to organize a special exhibition dedicated to the zodiac’s representative sign of the year. 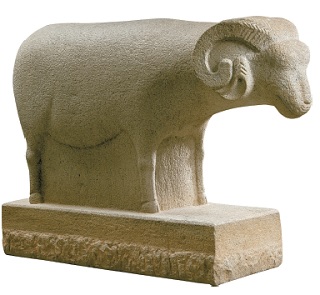 Sheep-shaped stone monuments from the early 20th century were believed to ward off evil and bring blessings. Provided by the National Folk Museum of Korea

“To most Koreans, sheep come off as friendly but also a bit foreign,” Min Bo-ra, one of the museum’s curators says, “This is because Koreans rarely saw sheep before the 20th century.”

Nonetheless, sheep are considered a lucky omen in Korea and represent hope for happiness, according to museum officials. That is why the museum has dubbed the exhibition “A Sheep Bringing Happiness.”

Among the 76 articles on display is a sundial from Korea’s Goryeo Dynasty (918-1392) with engravings of the zodiac’s 12 animal signs.

A royal flag from the late Joseon Dynasty (1392-1910), which is emblazoned with the head of a sheep, is also on show at the museum. While not an aesthetically pleasing flag, it is significant in that it was believed to ward off evil and was used in royal processions attended by the king or at state funerals.

Also displayed are utensils that were used at royal rituals. One piece looks like sot, or a traditional Korean caldron made of cast iron. The vessel’s legs are in the form of sheep, again emphasizing how the animal was often used on royal articles.

Reflecting the museum’s recent attempts to incorporate themes and artifacts relevant to Asia in general, rather than limit itself to Korea, the exhibition also presents some relics from China’s Han Dynasty (206 B.C.-A.D. 220). They include sheep-shaped decorative items from the first century.

The animal also continues to inspire Koreans in more modern times, museum officials say. Through the work of renowned Korean poet Pi Chun-deuk (1910-2007) and a traditional vest made of wool, both of which are on display at the exhibition, officials emphasize that sheep can also be easily found in Korean people in contemporary times.

“A Sheep Bringing Happiness” runs until Feb. 23. It is free of charge. The museum is located inside the grounds of Gyeongbok Palace in downtown Seoul. For more information, visit http://nfm.go.kr.