Participants in UNICEF’s Uni Hero campaign pose for a photo. By taking a picture at the UNICEF booth, attendees can donate to those in need. The photo is pasted onto the body of superhero who helps children battling sickness and famine. By Kwon Hyuk-jae

There, anyone could become a superhero in mere seconds, with just a few clicks of a mouse. Participants could choose from five selections, - Malaria Net Girl, for instance, or Wonder Vaccine or even Edu Dream Man - then the computer would take their photograph and manipulate the image, giving them the body of a superhero. 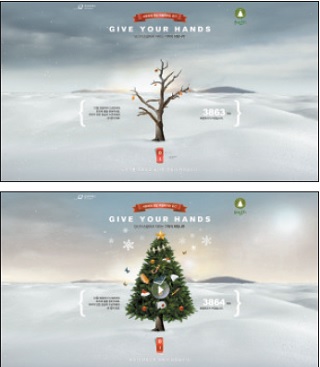 The Hope Tree campaign, developed by the charitable organization Good Neighbors, enables users to light up a virtual tree with the simple touch of a smartphone app. With 5,000 accumulated taps so far, actual donations also take place offline. Provided by the charity

It may sound like some sort of promotional activity targeting the younger demographic, but, in fact, the process is part of the charitable campaign Uni Hero, organized by UNICEF.

Anyone who takes photos inside the booth is able to donate without spending a penny. Instead, private companies that sponsor the campaign donate to UNICEF on behalf of the campaign participants.

It’s easy, particularly because attendees aren’t required to fill out a donation form or open their own wallets. Instead, they can participate in a no-pressure activity all while giving to a noteworthy cause.

But the UNICEF program is just one of a variety of fun and lighthearted charitable campaigns that have caught on among young people - devoted users of Twitter, Facebook and other social media.

Bigwalk is one of the more popular smartphone applications.

Once the app is downloaded, its GPS tracks the user’s daily steps. One won is donated for every 10 meters (32.8 feet) walked.

Users donate by walking, while private companies shell out the cash.

Since 2011, 250,000 people worldwide have downloaded the app and had collectively walked 3.2 million kilometers (2 million miles) as of July.

The results of their efforts amounted to 320 million won ($288,391) donated to amputee children last year.

“I highly recommend these smartphone apps to my friends because it makes donation much easier,” said Cho Gyeong-mo, a college student who uses Bigwalk app.

“I think it’s a fresh attempt. It attracts people who aren’t that into donating. It also makes you think about what it really means to donate, because so many young people are only interested in charitable giving that might be helpful in their future job search.”

Smartphone games have also made their way into the philanthropic realm.

The smartphone app Tree Planet enables players to plant trees when they complete certain missions between three and seven days.

Due to the game’s proven popularity, offline competitions also take place in a number of countries.

In Korea, a competition was held among different colleges in November. Chosun University came out on top, winning the grand prize of being able to donate trees by Cheonggye Stream in central Seoul under its name.

“The game itself is so much fun, I can’t even stop playing during exam time,” said Yu Ji-hyun, 20, one of the final winners in the Tree Planet competition in Seoul.

“It’s also so much fun to share tips on how to complete missions with my friends through SNS,” she continued. “I feel proud because I can donate while I play the game.” 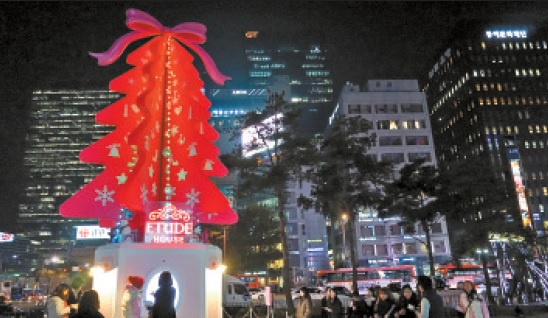 Another game, Raising a Red Goat, was developed in June by Save the Children and is especially popular among young women interested in growing animals.

In it, the user is tasked with cultivating grain for his or her red goat in a virtual world. They must also toil away to vaccinate their cattle. Despite its appeal as a smartphone app, the game also raises awareness about the importance of livestock and nutrition in underdeveloped parts of the world.

When all the given tasks are complete, users are obliged to upload a photo of their grown red goats onto Save the Children’s website, and an actual goat is then donated to families in certain African countries.

One such app is Give Talk, which is activated whenever a smartphone user finishes a telephone call.

By simply tapping the app, a private company sponsors a donation.

Cashslide has a similar function: Each time one’s smartphone is unlocked, the app is automatically opened and between 2 and 4 won is accumulated by the user.

They may spend the accumulated money as they please, which could mean a cup of coffee for some, though most tend to donate it to a cause of their choosing.

“Some of our customers wanted to donate their cash, so we’ve updated the platform so that people can donate,” said Heo Won-seok, 31, a public relations department official for the app company.

As of last year, Cashslide had attracted 10 million users.

But even though the amount may seem miniscule, the apps themselves bring much-needed attention to the country’s charities.

Good Neighbors saw a 13 percent increase in donations last month compared to a year ago.

“SNS plays a crucial role in attracting young donors and it also promotes sharing and a donation culture among those people,” said an official working for the Community Chest of Korea.

“In order to keep up with the times, we’ve launched a digital department and are reviewing [all the possible] ways of dealing with [young people who are accustomed to donation through their SNS accounts or smartphones].”

“But these apps help me to become part of a campaign and care for people living outside the government’s safety net,” she added.

Others find app-oriented donation services to be more direct and transparent compared to traditional online donations.

“I see many online-based donation campaigns around this time of the year but I find myself reluctant to donate because they never let me know where my money goes,” said Park Yun-jin, a 26-year-old college student.

“But I can pinpoint people whom I wish to help through SNS and I also can get feedback instantly about the donation,” she added.

With more young people taking interest in SNS-based charities, more companies have also begun to consider adding them to their corporate social responsibility campaigns, in which private businesses contribute to society while improving their corporate image.

Samsung Group donates 500 won per Facebook like it gets through its official Facebook page. Its campaign is devised to assist people in need of fuel and heating during the winter.

Social commerce website Ticket Monster did a charitable campaign in May as well, collecting 48.2 million won for a baby who was born without eyes.

“We’ve been conducting charitable campaigns since 2010 but this one attracted the highest number of donors because we promoted it through SNS,” said Kim So-jeong, the team leader of the public relations team for the social commerce website.

But some have expressed concerns about SNS-oriented charities, arguing that they potentially overshadow the real meaning of giving. “All companies need to focus more on the purpose of donating, instead of approaching it as entertainment,” said Bekay Ahn, who heads Certified Fund Raising Executive.

“Some were skeptical about the ice bucket challenge [for amyotrophic lateral sclerosis] when it went viral,” added Park Hyo-won, an official with the Beautiful Foundation. “But the campaign was possible thanks to SNS.

“Individuals and companies that participate in SNS donations should try to use charitable SNS campaigns as a way of cementing and promoting a more mature culture of donation and sharing in Korea.”


Other zany ways to donate

Before SNS-oriented charitable campaigns became popular, many people often sought out ways to be involved in charities rather than simply donating money. One of the oldest ways to donate is to buy a cap-knitting kit developed by Save the Children.

One kit for a single knit cap is priced at 15,000 won. Those who wish to be a part of the campaign must purchase the kit first, then follow the instructions. The knit hat goes to newborns in developing countries like Uganda and Ethiopia.

According to the organization, many newborns run the risk of dying from hypothermia, and the cap is intended to protect them from the cold. First launched in 2007, more than 1 million knit caps have been donated to newborns and the charity has since earned 9.2 billion won in kit sales. All proceeds go toward nutrition projects serving children in underdeveloped nations.

Toy kits starts from 10,000 won and assembly instructions are easy.

On the other hand, the charitable organization WeStart took a different approach to giving early last month, holding a talk show with popular guests from the JTBC program “Non-Summit.”

All the proceeds from the concert tickets went to children in need.