Shepherd reflects on success of his ranch

Shepherd reflects on success of his ranch 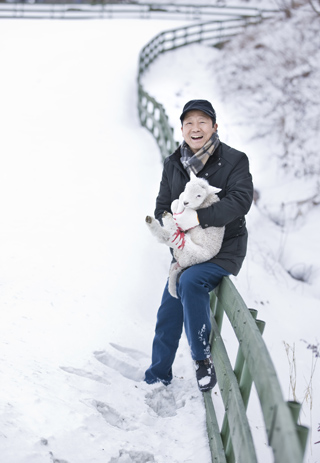 Jeon Young-dae, the owner of Daegwallyeong Yangtte Ranch, poses with a lamb in Gangwon, east of Seoul. By Kwon Hyuk-jae

When it comes to parenthood, there appear to be few differences between human beings and animals. When an ewe bleats, a newly born lamb replies without a moment of hesitation and finds its way to its mother.

“The mother knows her baby through smell, and the baby knows its mother through voice,” said Jeon Young-dae, the owner of Daegwallyeong Yangtte Ranch, situated at an altitude of 830 meters (2,723 feet) in Gangwon, east of Seoul. Yangtte means “sheep” in Korean.

“The mother finds her baby through the smell of the amniotic fluid that broke through during birth.”

But this delivery has taken place at an unexpected time.

“We raise females and males separately, and every mid-September we unite them for mating,” Jeon said.

“As sheep are pregnant for five months, the birth wasn’t supposed to take place until February. I have no idea how [the mating] happened,” he smiled. 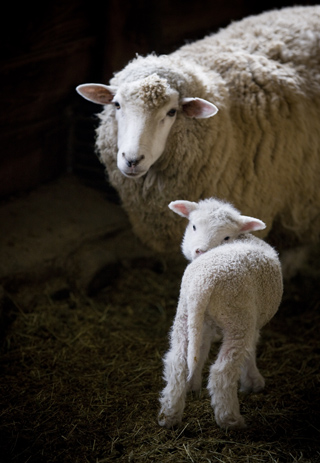 Life is often filled with surprises - a saying that can be applied to Jeon’s path through life. About 30 years ago, he had no idea that he would be running a picturesque sheep ranch, like he does today.

On our recent visit, the ranch looked perfect, with snow-covered meadows and milk-colored clouds.

But to maintain that beauty and calm, Park has sweated, and has even shed tears at times. After all, he transformed a 200,000 square-meter (20 hectares) plot of land into a tourist magnet that some 600,000 people visit every year.

With 2015 being the Year of the Sheep, according to the Chinese zodiac calendar, the JoongAng Ilbo traveled to Jeong’s ranch to listen to his stories about the animals, the ranch and the events that led him there.

There is an old saying, “You lose a cow and gain a sheep,” referring to a situation in which one misses out because cows usually cost more than sheep.

But this doesn’t apply to Jeong, because he’s living a content life thanks to the woolly creatures he looks after.

His first encounter with Daegwallyeong Ranch goes back to 1986. Back then, he was working at the sales department of a pharmaceutical company.

“One day, I visited Samyang Ranch in Daegwallyeong and I was stunned by the picturesque scene of herds of cows on grasslands,” he recollected. “And I thought to myself, ‘How about sharing such a scene with more people, turning it into a tourist site?”

When asked why he chose to raise sheep and not cows, Jeong said the price of bovines took a nosedive in the 1980s and that the future of animal husbandry in Korea looked gloomy.

“I happened to meet a professor who was raising several sheep. It was through him that I got to learn about the animal. I even tasted sheep meat,” he explained.

After that, he envisioned owning a ranch in Daegwallyeong and visited the area more than 10 times over the next two years.

But the concept of a “tourist ranch” didn’t really strike a chord with people at the time. Jeong reminisced about the days he visited various institutions asking about the requirements needed to build a “tourist sheep ranch,” and being called a “crazy person.”

“Since I was very young, I read the newspaper every day and truly believed that our farming industry must change in order to survive. No pain, no gain,” he said. “Also, I was tired of city life. So, after the Seoul Olympics [1988] ended, I brought my family here.”

People may think Jeon has a farming background, but he’s actually from a fishing village in Gunsan, North Jeolla. Plus he came to Seoul when he was 19 years old, so he has never had to plow the earth in his entire life.

“Keeping a ranch was a challenge,” he said. “Moreover, it was just me and my wife. I brought my family here after proposing a romantic rural life, but what awaited us was just an empty, bleak land.”

Gujeolyangjang is another old proverb that refers to a life full of ups and downs, just like the intestines of a sheep with its many curves.

Jeon’s early years as an amateur shepherd were also full of ebbs and flows, and trial and error. His life in the meadows meant days and nights without electricity and a water system. He used candles for light and cooked rice with water from the stream.

“First I learned architecture. I had to build the cattle shed, right?” He said. “Hammering, brickwork - I learned it all. Then I had to make grassland, so that sheep could feed on the grass. I picked out stones from the land and set up a barbed-wire fence.”

It took him 13 to 14 years, Jeon says, for the ranch to “look like a ranch.” Then he created programs for visitors. Through word-of-mouth, more and more people came.

Although he doesn’t consider the 14 or so years the “lost years” of his life, he certainly thinks he lived like a “wild animal” or a “beggar of beggars.” He also said he wasn’t able to buy decent clothes for his children.

“But I knew one day people would come here,” he said. “For the past half a century, Koreans have flocked to metropolises. Those who are sick and tired from competitions and races are bound to come back to the countryside, seeking peace of mind. What better place than in the meadows, where sheep peacefully feed on grass, would give a peace of mind?”

At Jeon’s ranch, there are about 270 sheep. Every year, about 100 are born, a number he parcels out across the country. Most of the demand comes from schools, kindergartens and other farms. Sometimes unlikely institutions also ask to buy sheep, like motels. But Jeon says it’s impossible to meet the break-even point just by selling sheep in Korea.

There is also a saying in Korea that people born in the Year of the Sheep cannot get rich, mostly because they are too soft and honest.

This doesn’t really apply to Jeon. His hard work on the ranch has paid off.

And now that the business has grown, his two sons - who were 5 and 3 when they first came here - are preparing to take over.

However, Jeon says he sees the ranch as a worthwhile business rather than a corporate venture created merely for profits.

“There is no coffee place or a restaurant or a tteokbokki place,” he says, referring to the rice cake dish, a popular snack in Korea. “A ranch is all about valuing peace and tranquility. It shouldn’t get too commercial.”

A coffee place, Jeon says, could yield immediate profits, but in the long run the ranch would become just an empty shell.

Immediate profit is certainly something Jeon isn’t really interested in. In 2009, he lost his wife. He was devastated about her death and felt guilty. After all, it was him that dragged her to the ranch and all the hard work it entailed. That is why Jeon donated 100 million won for a scholarship at the high school she attended in her name.

“It was exactly 12 years ago, another Year of the Sheep, when the ranch began to get popular,” Jeon said. “We were so thrilled that we didn’t accept any fees that year. Sheep are my life companions. There is no me without sheep.”

Jeon added that there are few animals as mild and gentle as sheep, which never attack other animals or bite people.

“I hope more Koreans take after such qualities and find peace at home and work. After all, 2014 was a sad year for Koreans,” he said, referring to the deadly ferry accident in April that killed more than 300 people.