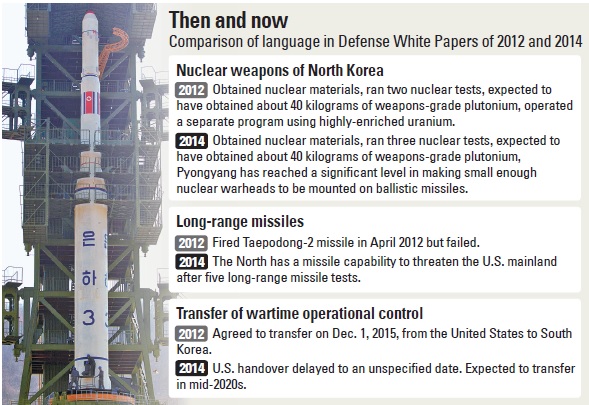 North Korea is presumed to have “a significant ability” to produce nuclear bombs small enough to be mounted on missiles, the latest Defense White Paper by South Korea said Tuesday.

The Ministry of National Defense issued the Defense White Paper 2014 on Tuesday, presenting the latest information on the militaries of the two Koreas. In this report, the ministry discussed Pyongyang’s atomic weapons, using the term “nuclear weapons of North Korea” for the first time in a defense white paper.

It also talked about the extended missile range of the North - which is now capable of reaching the U.S. mainland.

Until now, Seoul has been reluctant to acknowledge Pyongyang’s nuclear abilities despite its many years of operating an atomic arms program. The last defense white paper, published in 2012, only noted that the North conducted two nuclear tests in 2006 and 2009, but did not provide a technical assessment.

The North must also have made significant progress in miniaturizing nuclear weapons, the report said.

“Although we do not have intelligence that confirms the North’s success in making small nuclear warheads that can be mounted on ballistic missiles, other nuclear countries took two to seven years to succeed in miniaturization,” said an official from the Defense Ministry. “Eight years have passed since the North conducted its first nuclear test in 2006. Seoul and Washington, therefore, jointly conclude that Pyongyang’s nuclear capabilities must have reached a significant level.”

The South made a similar conclusion based on the amount of soil excavated for the underground site the North used in its last nuclear test. It was considerably less than the soil removed from past test sites, meaning a smaller site was needed. The North has so far conducted three nuclear tests. The latest one took place Feb. 12, 2013.

The military also concluded that the North has the missile capabilities to threaten the U.S. mainland after five long-range missile tests. With progress in miniaturization of nuclear warheads, North Korea’s possession of a nuclear-armed inter-continental ballistic missile is Washington’s nightmare.

Until recently, the military said the North was capable of launching an inter-continental ballistic missile, but it was unclear if it had the technology to allow the missile to re-enter the atmospheric successfully. The new conclusion indicates that the North has missiles with a range of 10,000 kilometers (about 6,000 miles).

“The range of the newly developed Taepodong-2 missile is 10,000 kilometers,” said the ministry official. “We have not detected a test firing of the KN-08 missiles, which were first unveiled in a 2013 military parade, but we took into account Pyongyang’s claim that it successfully launched the Unha-3 in 2012.”

The white paper also noted that the North has recently reinforced the artillery capabilities of its ground forces, including tanks, armored vehicles and multiple rocket launchers.

“The North recently put enormous efforts into strengthening its artillery capabilities and expanded some of the mechanized units,” said a military official. “About 200 to 300 armored vehicles were added.”

The North Korean military also carried out a massive restructuring. The Military Security Command, an agency that was under the Korean People’s Army (KPA) General Staff, was moved to serve the General Political Bureau of the KPA in order to buttress North Korean leader Kim Jong-un’s control over the military.

The report said the total number of troops in the North Korean military went up by 10,000, particularly those serving in the air force. With a new installment of the 12th Corps, the North will operate 15 corps-size units including 10 conventional corps, two mechanized corps, the Pyongyang Defense Command and the 11th Corps composed of special forces.

The latest white paper also included the first mention of the North’s cyberwarfare operations. It said the North currently operates about 6,000 agents for cyberoperations and their missions are attacking the South’s infrastructure systems and interfering with military operations.

The white paper also maintained the position that South Korea’s main enemy is the regime and military of North Korea.