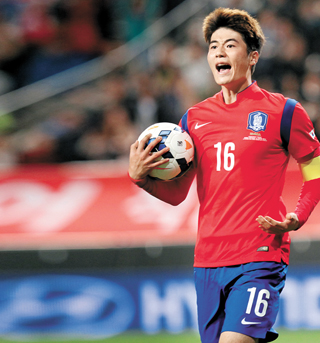 Once known as a troublemaker on multiple football teams, Ki Sung-yueng of Swansea City was named captain of the national team on Wednesday as the team heads to compete in the Asian Cup in Australia, which kicks off Friday.

Manager Uli Stielike named the 25-year-old midfielder as captain and chose Lee Chung-yong of the Bolton Wonderers as vice captain after a training session in Canberra on Wednesday as the other players, including former captain Koo Ja-cheol of Mainz 05, applauded.

The 60-year-old German manager has picked Ki twice before to lead the Taegeuk Warriors in friendlies against Paraguay and Costa Rica in October. At the time, Stielike said that Ki “is an experienced player and can manage all the players from the youngest to the oldest.” In his first match as captain against Paraguay, Ki led the team to a 2-0 win.

Ki became known as a troublemaker on the national team in July 2013 after it was revealed that he had posted comments criticizing the leadership of then-Manager Choi Kang-hee on his Facebook account. He was also leased to Sunderland from Swansea for a year in August 2013 reportedly due to a conflict with then-Manager Michael Laudrup.

But Stielike has picked Ki despite the issues because of the major role he plays on the national team.

“Ki is able to play both offense and defense,” the manager said. “It is an incredible talent.”

Ki’s main position is defensive midfielder, but he often takes part in attacks with his accurate passes and midrange efforts.

Another reason Ki was named captain is because former captain Koo performed poorly against Saudi Arabia on Sunday.

“Manager Stielike was torn between choosing Ki and Koo as captain up to the last minute,” said an official at the Korea Football Association.

Ki’s captain armband will remind him of his role model, Liverpool captain Steven Gerrard, a football superstar known for his selfless playing. Ki was nicknamed “Kirrard,” a combination of his surname and Gerrard, because of his similarities with the former England captain’s playing style.

Compared to the captains of other Asian Cup teams, Ki is relatively younger. The teams in Group A are led by captains in their 30s.

But age doesn’t seem to matter to Ki, and he said he is focused on teamwork.

“We cannot win the Asian Cup with just a few great players. We can win the competition only when all members of the national team become one, and that’s why those who are not playing in the match should be prepared as well,” Ki said. “I am aware of the great responsibility as captain. I’m going to do my best to help the team with what I have.”

Korea’s first Asian Cup match will be Saturday against Oman.