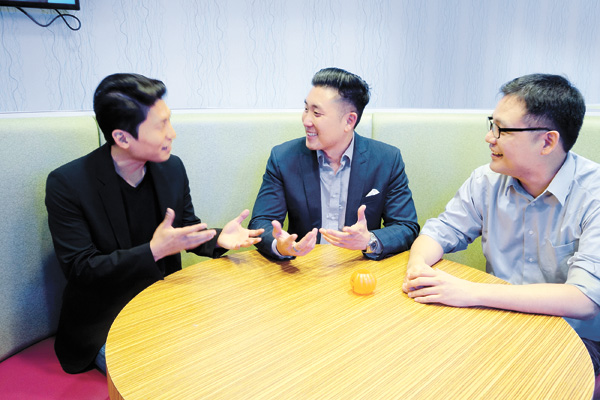 From left to right: CEOs Moon Dong-ji of GORI and Jocoos USA, Solomon Choi of 16 Handles and Koo Min-kyu of Subcommune discuss their businesses at Choi’s store in Manhattan. By Song Su-hyun

NEW YORK - In a 19th-floor lounge at WeWork Labs, a start-up incubation center in the Wall Street district of New York City, Moon Dong-ji greeted Koo Min-kyu, who was meeting with his colleagues, in Korean.

Moon, 31, CEO of GORI and Jocoos USA, and Koo, 36, CEO of Subcommue, met at a start-up event in New York a few months ago and exchanged business cards. Both chose New York to launch their businesses.

They reflect the growing number of young Korean entrepreneurs looking for more opportunities on the international stage. 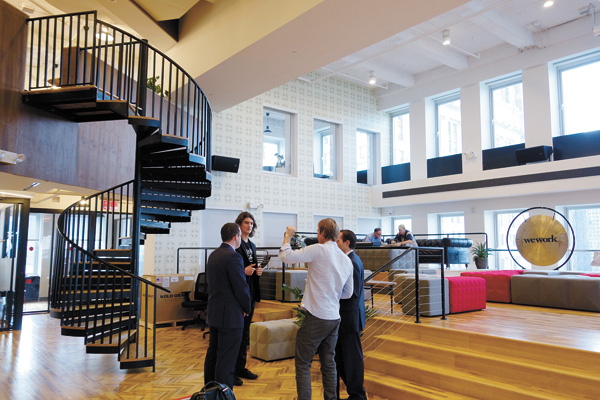 Entrepreneurs engage in a discussion at a WeWork Labs office in New York. Provided by the company

Moon established his company in February 2011. GORI provides a networking service that helps arrange private parties and events among members. As an international finance major at Temple University, Moon worked for companies like Barclays Capital and Pfizer.

Koo’s Subcommue is one of 25 Korean start-ups chosen at the K-Tech competition in Silicon Valley. The company produces DIVII, a video English-learning dictionary, and has offices in Seoul and India. But the CEO is in New York looking to expand further.

The good thing about New York is that there are a lot of people interested in start-ups, and there are many occasions and places to meet them, Koo said.

At fairs like NY Tech Meetup, one of the best-known events in the city, about 800 start-ups and entrepreneurs present their technologies and products. Typically, there is at least one event each month.

According to the Korea Trade-Investment Promotion Agency (Kotra) in New York, the number of Koreans launching start-ups in the city is on the rise.

As of October, there were 334 members of the Korean Startups & Entrepreneurs (KSE) group in New York, the largest organization of Korean entrepreneurs in the eastern United States. Other than the KSE, new groups like Gori are being formed to promote partnerships and networking among Korean start-ups in the United States. The number of start-ups asking Kotra for information on intellectual property rights is also increasing.

Although New York is known as one of the world’s most expensive cities, young entrepreneurs across the globe are flocking to the Big Apple because of open access to human networks, exposure to a wide variety of culture and convenient infrastructure.

One of biggest advantages of New York is the ability to share information through networking events, said Joseph Juhn, an intellectual property lawyer at Kotra in New York.

Kotra’s New York office plans to establish a support program this year. The program will select promising Korean start-ups and invite them to New York.

“The reason why I chose New York is simple: more people and more opportunities,” said Koo. “New York is one of the most unique cities with people of many different nationalities.”

Convenient transportation is one of the biggest advantages of New York, the Korean entrepreneurs say.

“You can get anywhere and meet anybody by subway or bus or on foot,” said Moon. “Since it is the world’s financial hub as well as a center of culture, with convenient transportation infrastructure you can go anywhere to meet some experts or collect plenty of information.”

New York has great accessibility to everything, too, he added, compared to Silicon Valley, where buildings and facilities are spread out.

The municipal government began promoting start-ups in 2012, and start-ups selected by the city government can receive tax benefits for as long as 10 years.

Global IT juggernauts such as Google and Amazon have set up branches in New York, and they are connecting with start-ups.

The Korean company also recently decided to reorganize its mobile and IT businesses in the United States and relocate its headquarters to New York.

In Seoul, the start-up surge led by the Park Geun-hye administration is reaching its peak among young entrepreneurs under the age of 39.

According to the Small and Medium Business Administration, the number of businesses created by that age group in 2014 stood at 16,659 as of September, an increase of 4.7 percent compared to the same period the previous year.

“While start-ups by baby boomers are often created to make ends meet, young people are making start-ups to compete with ideas and new technologies, looking for a blue ocean,” said Shin Yong-han, chairman of the Presidential Committee on the Young Generation.

Experts say the current start-up boom represents an upgrade from a similar one in the early 2000s known as the venture boom. As more Koreans study abroad and work for foreign companies, they are targeting the global market, like Koo and Moon in New York.

In Korea, the infrastructure for start-ups is slowly improving.