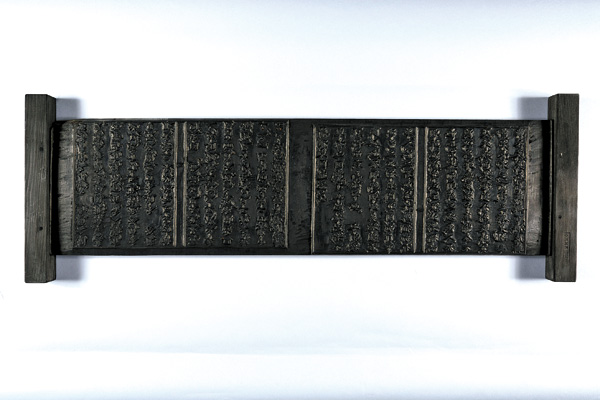 The 17th-century woodblock, which was used to publish the Korean history book “New Edition of Dongguk Tonggam” in Japan, was recently found in Korea. Provided by the Kyujanggak Institute for Korean Studies

History books often reflect a country’s governance. And a look at how they were made can be very dramatic.

A set of 17th-century woodblocks - which were crucial for Japan to understand Korea in those days - was recently found in the archives of a university in Seoul.

The woodblocks were used to publish a Korean history book that medieval Japan relied on to study its neighbor.

The discovery is significant because the woodblocks were last seen in 1928 by a Japanese professor. As their whereabouts then became unknown, most Japanese and Korean scholars assumed they were destroyed sometime during our nation’s tumultuous modern history.

However, Prof. Kim Si-deok of the Kyujanggak Institute for Korean Studies, which is affiliated with Seoul National University, argued in his dissertation published Jan. 2 that the woodblocks have been kept at Kyujanggak since Korea was liberated from Japan. They were only identified by their researchers last month.


Story behind the book

According to Kim, one woodblock measures 90 centimeters (35 inches) in width and 23 centimeters in height, and there are 533 at Kyujanggak. Originally, there were 535 woodblocks, according to Japan’s historical records. But it is unclear where the missing two are.

These woodblocks were made in Japan in the mid-1600s by Tokugawa Mitsukuni (1628-1701), the second daimyo of the Mito domain in today’s Ibaraki Prefecture. They were used to publish the book “New Edition of Dongguk Tonggam” in Japan.

Mitsukuni created the woodblocks based on the original “Dongguk Tonggam,” published in Korea in 1485, which explains the addition of the words “New Edition” for the book published in Japan. 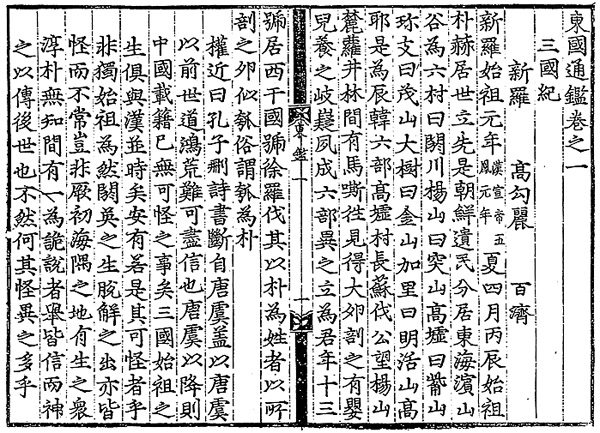 The original “Dongguk Tonggam” was published in Korea in 1485 and was taken to Japan in the middle of an invasion. The new edition is based on the original. [JoongAng Ilbo]

At the order of Joseon Dynasty’s King Seongjong (1457-1494), government officials and scholars, including Seo Geo-jeong, wrote the original book compiling Korean history from its foundation to the late Goryeo era (918-1392).

“Dongguk Tonggam” roughly translates to “Comprehensive Mirror of Eastern Country.” But the original “Dongguk Tonggam” was taken to Japan during its invasion of Korea, better known here as the Imjin War (1592-98).

The newly found woodblocks, according to Seo, are an important relic for Japan, particularly because of the place Mitsukuni has in its history.

Tokugawa Mitsukuni is one of the most prominent figures in Japanese history. His life has been turned into a novel and a long-running period drama on prime time TV, titled “Mito Komon.” He is also still celebrated at a regional festival in Mito, Japan.

In fact, Mitsukuni, along with some other scholars, compiled Japanese history for the enormous “Dai Nihon Shi,” in which Japan is portrayed as an empire similar to China. 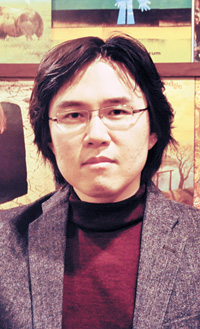 The book, observers say, helped the rise of nationalism during Mitsukuni’s time, especially in the Mito domain.

“ ‘New Edition of Dongguk Tonggam’ was the most read book by the Japanese during the Edo period, when people wanted to learn about the general history of the Korean Peninsula,” Seo said. “And Tokugawa Mitsukuni had an egotistical belief that, as Korea is the [peripheral nation] of Japan, Japan had to know Korea well.”

Seo and other Korean experts believe that “New Edition of Dongguk Tonggam” would have played a role in the formation of Japan’s views on its own history, as well as that of its regional neighbors, and that their interpretations appear to be more arbitrary rather than objective.

Japan used the woodblocks again in the 19th century. It printed another edition of “Dongguk Tonggam” in 1883 during the Meiji government.


A twist of fate

Between 1928 and 1930, Gyeongseong Imperial University, which later became Seoul National University, requested for the woodblocks to be moved to its archives for research purposes. Then, in the 1970s, they ended up at Kyujanggak.

“They appear to have been moved from Gyeongbok Palace to Kyujanggak between 1974 and 1975,” Seo said.

An 1853 Japanese book depicts the story of how Korea’s Goguryeo Dynasty (37 B.C. - 668 A.D.) was founded, inspired by the “New Edition of Dongguk Tonggam.” [JoongAng Ilbo]

The facts seem to show this: A Korean history book was stolen and brought to Japan during the invasion. Japan makes its own version of a Korean history book based on it. The woodblocks used to print that book is brought to Korea, then vanishes during chaotic times in history and somehow surfaces again 90 years later. What a twist of fate. 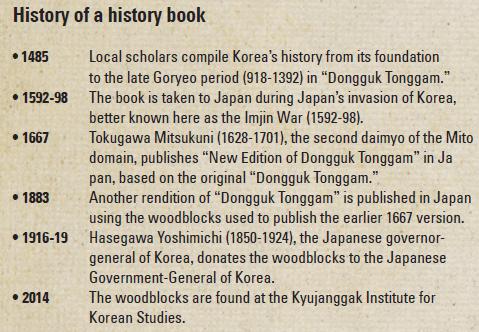 “[The incident] is quite a miracle, and also makes us contemplate on the history of cultural exchanges between Korea and Japan,” Kyujanggak’s Kim said. He added that it is important to continue to search for historical data from Japan and China that are currently here in the belief that Korean studies are also East Asian studies.

In his dissertation “The Point of Contact between War and Bibliography,” Kim also said it is necessary for a change in notion in the field of bibliography: That their studies have to go beyond printed materials and also touch on woodblocks.