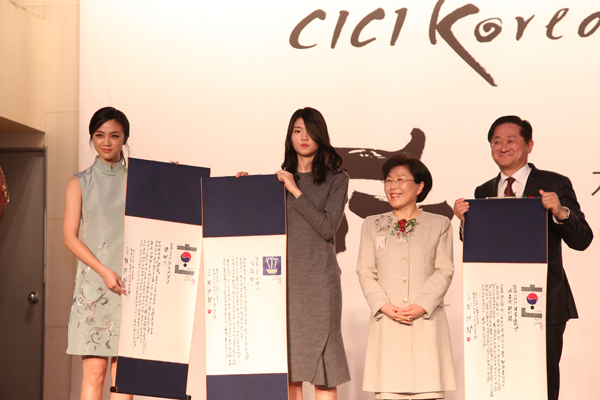 The awards, which are hosted by the Corea Image Communication Institute (CICI), select companies, people or objects that are considered the biggest contributors to enhancing Korea’s image globally each year.

“The Year of the Sheep has finally arrived. I was born in the Year of the Sheep and so was Tang Wei, who is one of the awardees today. It feels like the year is off to a good start,” said Choi Jung-wha, president of CICI, during the ceremony’s opening speech Monday evening at Coex Intercontinental Hotel in southern Seoul.

CICI was founded in 2003 to come up with more effective ways to improve and promote Korean culture around the world through various cultural activities, such as publishing books and holding multicultural events and conferences. 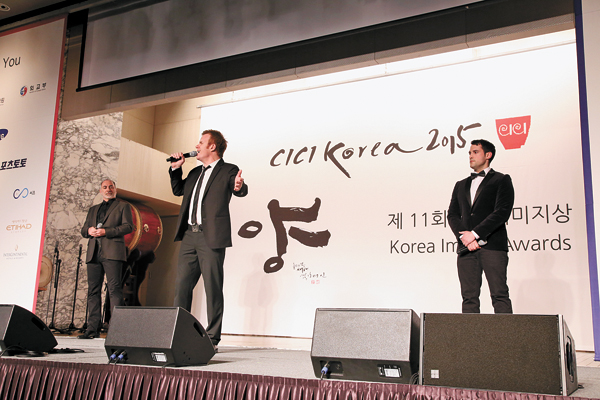 “Today is the day where pivotal players of Korean culture gather in one place and promise its prosperity in the future,” Choi added.

“I want to say a sincere congratulations to the recipients of this year’s CICI for doing a wonderful job,” Lippert said in a speech.

“They are building bridges across culture and at the same time introducing Korea’s image around the world.”

AmorePacific, which received this year’s Korea Image Stepping Stone Award, was selected for spreading Asian beauty across both the East and West through its diverse cosmetics brand.

In his acceptance speech, CEO of AmorePacific Suh Kyung-bae said that the beauty the company creates derives from “diversity” and “nature.”

Chinese actress Tang Wei received the Korea Image Stepping Stone Bridge Award for her close ties with the Korean movie industry, which began with her lead role in “Late Autumn” (2010).

The film was directed by Kim Tae-yong, who is now her husband.

She was also a cultural ambassador in 2012 for the Korean Film Festival, which celebrates the 20th anniversary of the Korea-China diplomatic relationship.

During the gala dinner, which proceeded with a silent auction, short speeches by foreign ambassadors to Korea and a lucky draw, CICI also revealed results from a series of surveys conducted on 433 local and foreign opinion leaders in the country.

According to the results, the majority of the respondents from both Korean and foreign countries picked “culture and art” as the sector that improved the most last year and selected the Incheon Asian Games as the biggest player that helped to achieve this feat.

Answers diverged when it came to picking the most attractive destination in Korea besides Seoul, however. While 52 percent of Korean respondents picked Jeju Island while 59 percent of foreign respondents chose Busan for its various kinds of attractions.

Also, the biggest number of foreigners surveyed said Korean design should be emphasized when promoting Korean culture, while Koreans picked Korean food as the next big thing.

The organization explained that the result shows that many people from overseas are drawn by hanok, or Korean traditional houses, calligraphy and handicrafts that reflect Korean culture.

“The harmony among the recipients was the key point in this year’s event’s success,” Choi told the Korea JoongAng Daily.

“AmorePacific has chased beauty for the past 70 years in a nature-friendly way and Tang Wei also pointed out yesterday that the longevity of Korean history was the biggest charm of Korean culture to her. They form a nice combination indeed,” she explained.

The next plan on CICI’s calendar is the Korea 5.4 Club on Jan. 29, which invites its members from culture-related organizations to talk about four matters - what to eat, see, do and discuss in Korea to ensure visitors use all five senses to make local travel more enjoyable.

For more information about the club, visit korea54club.com.