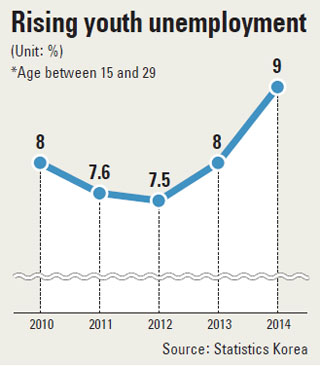 But the annual jobless rate for youths hit 9 percent, the highest level since 1999 when the method of calculation was changed, showing it’s a grim labor market for young Koreans.

According to Statistics Korea Wednesday, the total number of people who found jobs reached 25.5 million in 2014, increasing 2.1 percent from a year earlier. That increase is the largest reported since 2002. This helped ramp up the nation’s overall employment rate by 0.7 percentage point to 60.2 percent.

Based on standards by the Organization for Economic Cooperation and Development, Korea’s overall employment rate for people aged 15 to 64 is 65.3 percent, up 0.9 percentage point from the previous year.

The Ministry of Strategy and Finance was positive about last year’s employment situation, saying that the GDP elasticity of employment, which indicates the number of employed people in proportion to economic growth, was higher than for the previous year.

“Compared to the United States and Japan, Korean employment conditions improved significantly owing to growth of the services sector and the government’s efforts to create jobs,” said Joo Hwan-wook, a director at the ministry.

But when talking about the economically active population, which are people who are working or looking for jobs, more Koreans suffered from unemployment last year, the government data showed.

The unemployment rate for people between the ages of 15 and 29 was 9 percent, up from 8 percent a year earlier.

“The unemployment figure for young people represents the highest annual tally since corresponding data began to be compiled in 2000,” said Sim Won-bo, a director at Statistics Korea.

Another jobless rate dubbed the “Employment Underutilization Indicator,” which was adopted in October to supplement existing indexes, rose 1 percentage point to 11.2 percent in December. It measures people who are willing to work but currently not applying for jobs for various reasons such as preparing for examinations.

This indicator is based on guidelines by the International Labor Organization (ILO) and reflects the number of people who are “underemployed.” Under the conventional system of calculating employment, those that have not sought jobs for a set period are excluded from the statistics.

According to the ILO index, the total number of such unemployed Koreans stood at 1.89 million as of December.

“There is a seasonal factor in that there are people who lost jobs in the construction and agricultural sectors during the winter,” Sim said. “The figure rose mainly due to fewer jobs in farming and fisheries, but this was offset by more jobs being created in manufacturing, health and social welfare services, as well as people employed in the hospitality sector.”

In December, health and social welfare added 152,000 jobs, up 9.7 percent compared with a year earlier.