Diesel sales sputter as the price of oil heads south

Diesel sales sputter as the price of oil heads south 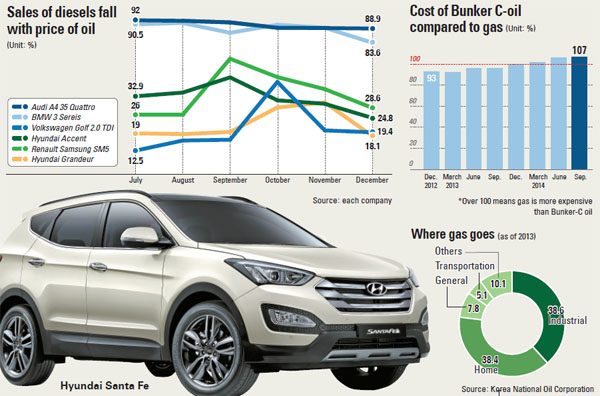 In August, diesels were 91 percent of BMW 3 Series sales, but by December that figure had slipped to 83 percent.

A similar trend was evident at Volkswagen. Sales of the Golf 2.0 TDI diesel hatchback were 602 units in October and 528 in December.

Industry insiders say that while foreign automakers were able to expand their market share in Korea thanks to diesel models, which use cheaper fuel and get better mileage than cars with gasoline engines, the recent drop in oil prices is changing that equation in the automobile business and related industries.

As a result, gasoline-powered cars - foreign and domestic - have been gaining traction with Korean consumers since September.

Sales of diesel models had consistently been above 90 percent for the Audi A4 35 Quattro before dropping to 88 percent last month. Diesel sales in August were 123, but only 88 in December.

“Due to strict environmental regulations, those brands have had a hard time selling diesels in Europe, but they were able to maintain overall global sales figures because diesel models were very popular in Korea,” said an industry spokesman. “Since oil prices keep falling, those automakers are in a situation where they have to change their marketing strategies.”

Outside the automotive industry, gas companies have also been affected by cheaper oil. Many companies with factories in industrial complexes, including Ulsan, South Gyeongsang, have been replacing natural gas with bunker-c oil.

The company serves major conglomerates that operate factories in Ulsan such as SK Energy, S-Oil and Hyundai Motor.

Similar situations are seen in other regions. For Youngnam Energy Service, which supplies gas to North Gyeongsang, including Gumi, the demand for industrial gas fell from 373.3 million cubic meters in 2013 to 318.77 million cubic meters last year, a 15 percent decrease.

“Natural gas lost its competitiveness as the average oil price dropped from about $100 a barrel to the neighborhood of $45,” said an industry spokesman.