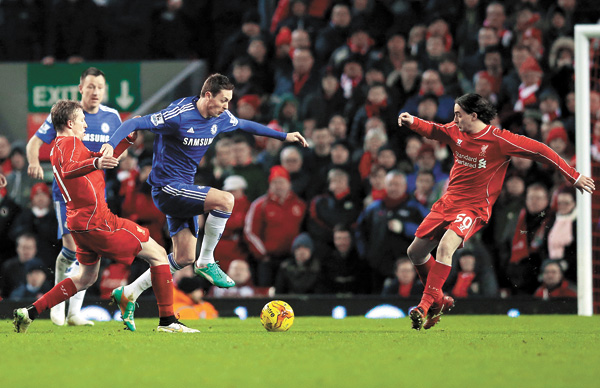 Raheem Sterling found a way past formidable Chelsea goalkeeper Thibaut Courtois with an exquisite solo goal to earn Liverpool a 1-1 draw in the first leg of its English League Cup semifinal on Tuesday.

It needed something special to beat Courtois at Anfield and Sterling delivered in the 59th minute, picking up the ball 40 meters (44 yards) from the goal, turning and speeding away from Chelsea’s defense before a low finish.

That canceled out an 18th-minute penalty won converted by Eden Hazard in the only shot on goal Chelsea produced in a defensive performance that saw the Premier League leaders outplayed at times, especially in the second half.

“They are a top side, but I’m not sure they’ve had a game like that this season,’’ said Liverpool Manager Brendan Rodgers. “I thought the performance was a benchmark. There is absolutely no doubt we can go to the second leg and get the performance we need.’’

Chelsea will be relieved to come away on level terms and is the marginal favorite heading into the return match at Stamford Bridge on Tuesday, local time. After a slow start to the season, though, Liverpool has rediscovered the identity and intensity that almost took the team to the Premier League title last season. The Reds are unbeaten in nine games.

Chelsea Manager Jose Mourinho grumbled about his side’s poor distribution, but that was due to the pressure applied by Liverpool, which is seeking to extend its record of eight titles in the League Cup.

The visitors had only two shots in a game played in light snowfall, one of which ended in the net when Hazard picked himself up after being fouled by makeshift defender Emre Can to send goalkeeper Simon Mignolet the wrong way from the spot.

After that, it was only the brilliance of Courtois that denied them a lead to take to London. He tipped Liverpool captain Steven Gerrard’s long-range strike over the bar in the first half and produced a string of fine saves after the break - the best on a fierce strike by Adam Lallana that the Belgium international palmed away, right-handed.

“Of course, after all the chances, we have to be happy with the result,’’ said Courtois. “They were dangerous and it was difficult for us.’’

Gerrard, seeking one last appearance at Wembley Stadium before his summer move to the Los Angeles Galaxy, struck the post with a left-footed curling shot as Liverpool came close to a second. Courtois also was lucky to escape without punishment when he carried the ball outside his area after sliding to collect a long pass. 