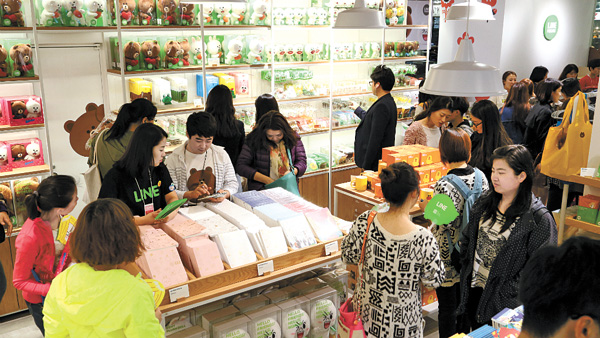 Shoppers at the Line Friends store in Myeong-dong, central Seoul, browse merchandise based on characters from Naver’s Line mobile messenger. Naver also has stores in the United States, China, Taiwan and Colombia. Provided by Naver

The Kakao Friends Brand Store in Coex features a row of models and dolls of KakaoTalk characters such as Muzi, the pickled radish, and Con, the green crocodile.

Daum Kakao sells about 170 items based on the characters, including clothes, socks, hot-pack hand warmers, calendars and cushions. In addition to the Coex store in Samseong-dong, Gangnam District, southern Seoul, the company operates stores in Sinchon, northern Seoul, and Daegu, North Gyeongsang.

Portal companies are gravitating to brick-and-mortar businesses as they seek avenues for growth amid fierce online competition.

The most popular business is selling character-based merchandise. Naver, for instance, has tapped into overseas markets with products based on characters from its mobile messenger Line, opening a Line Friends pop-up store in New York. It is the company’s 13th store, in addition to others in China, Taiwan and Colombia. 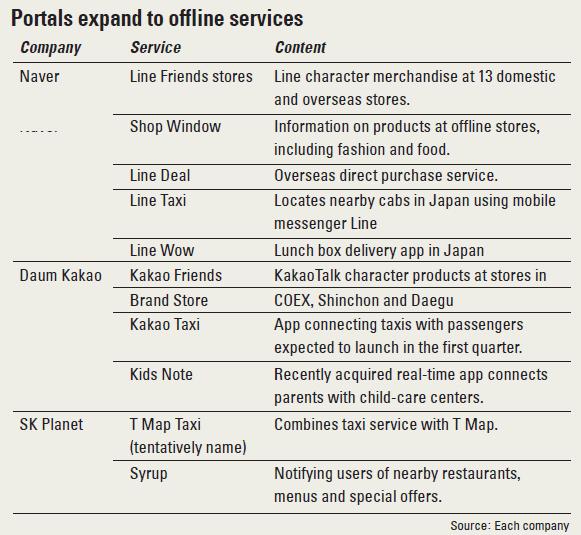 Dolls, umbrellas, pencil cases and keychains based on Line’s bear character, Brown, were so popular that they sold out.

“While generating profit is important, we are also trying to get more customers to encounter and experience Line in their daily lives,” said Won Yoon-sik, head of the PR team at Naver. “By collaborating with famous brands, we plan to expand our character business.”

Naver launched its Shop Window service at the end of last year to provide information about products at offline stores nationwide, such as the products of an interior design shop in Sinsa-dong, Gangnam, and a tableware store in Bangbae-dong, Seocho District, southern Seoul.

Daum Kakao will launch its Kakao Taxi app in the first quarter of this year to connect passengers with nearby cabs.

The domestic O2O market is in its early stages and no single player is dominant.

However, according to Digieco, KT’s economic research institute, the O2O commerce market, combined with the Internet of Things, has huge potential. It is expected to grow to as much as 300 trillion won ($277 billion) annually over the coming years from 15 trillion won in 2014.

In addition to the taxi service, Naver’s Line operates a lunch box delivery service called Line Wow, the Line Immediate Reservation Service app for restaurants, and Line Indoor Maps for guides to attractions such as shopping malls in Japan.

Daum Kakao is expanding investment in O2O start-ups to develop various new services and acquire their creative ideas to reinforce its competitiveness.

“As the environment for using the Internet has changed rapidly due to the proliferation of smartphones, current services cannot guarantee future growth,” said Jun Hak-sun, CEO of Institute of Global Management. “Other online-based businesses also will expand their services to offline businesses.”