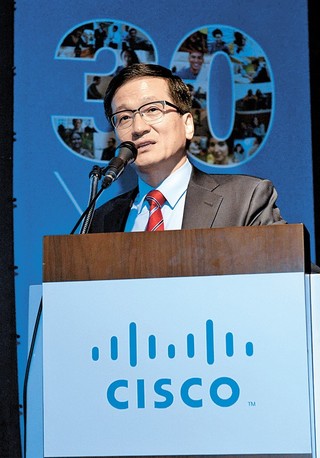 “Korea has prided itself as being a leading IT nation for the past two decades or so, but I’m not so sure the country can maintain the top position over the next 10 years,” Chong said at a press conference Tuesday night in Daechi-dong, southern Seoul, to celebrate the global-networking company’s 30th anniversary. “The nation may lose the lead largely due to local companies not spending enough to implement the latest IT technologies.”

Both the public and private sectors are not spending enough on tech security, even after undergoing multiple cybersecurity breaches involving data storage and networks in the past few years, Chong added.

He pointed out that the sluggish Korean economy is one of the biggest factors that discourage corporations from improving their IT infrastructure. “As we all know, Korea is highly interested in researching new technologies and becoming an early adopter, but changes are made too slowly,” he said.

Referring to the Korean branch as No. 2 within the Cisco group, Chong said the country is regarded among the company’s branches worldwide as a model for the development of IoT technologies.

He said the Korean government’s policies to increase investment in IoT development has enhanced the country’s position. Investment, which began in earnest after President Park Geun-hye and company CEO John Chambers discussed the matter at the Davos Forum early last year, was a major contributor to the enhancement of Cisco’s IoT competency.

This year, Chong said, he hopes to steer Cisco Korea toward playing a significant role in pushing the local business community to implement more up-to-date technological standards and keep abreast of latest trends.

He emphasized his hope that National Assembly lawmakers cooperate as soon as possible to pass the cloud industry promotion bill, which proposes that the public sector switch to the cloud for data storage.

The bill is aimed at expanding the private-sector cloud industry by instituting basic infrastructure that would allow more businesses switch to the cloud.

Chong said Cisco this year will focus on further developing existing technologies to make them applicable to the Internet of Everything (IoE), a system in which not just real-world objects, but people and data are all connected.

The company estimates that IoE will represent a worldwide market worth $19 trillion by 2020.