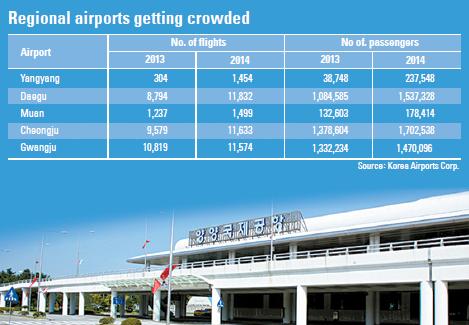 For many years, money-losing regional airports have been a headache for the country. According to data from the Korea Airports Corporation (KAC), which manages all of the nation’s airports except Incheon, 11 have amassed net losses of 721 billion won ($663 million) from 1990 to 2013.

Of those, nine airports have never made a net profit. Gimpo, Gimhae and Jeju International Airport were the only three that made a profit for the past 10 years.

“With the opening of new high-speed train routes, airports are suffering losses,” said Saenuri Party lawmaker Lee No-geun, who is a member of the National Assembly’s Land, Infrastructure and Transport Committee, after the Ministry of Land, Infrastructure and Transport’s audit last year. “If KTX opens routes for the Jeolla area, losses at the Yeosu, Gunsan and Muan airports will be aggravated.”

Critics point out that some airports shouldn’t have even been built, since many were pushed for political reasons.

“Politicians know that building new airports is almost impossible, but to gain voters’ support to get re-elected, they push it,” said Kwon Hyuk-cheol, director of the research group Center for Free Enterprise, in a recent seminar. “Some regional airports that were created in the trend of political purposes are turning into ‘ghost’ airports.”

However, some smaller airports are slowly improving due to the rise of low-cost carriers (LCC) transporting the influx of Chinese tourists.

According to data from the KAC, 61.6 million people passed through the nation’s 14 airports (excluding Incheon) last year, which is an 11.7 percent increase over 2013. Passengers on international flights were up 16.3 percent year-on-year, while people flying domestic increased 10.6 percent year-on-year.

Among regional airports, the biggest growth was recorded at Yangyang International Airport in Gangwon. The airport, which opened in 2002, was once an international mockery. From November 2008 to August, 2009, not a single airplane departed from there, making it the world’s quietest airport.

But things started to change in 2013 when the nation’s second-largest budget carrier Jin Air signed a deal with Gangwon to launch flights from Yangyang to 23 cities in China by March 2016, in addition to two domestic flights.

Then starting in April, Yangyang was selected as a non-visa transfer airport by the government, meaning tourists can stay there for 72 hours without a visa. In September, the maximum stay without a visa was extended to 120 hours.

After the changes, KAC data showed that about 237,500 passengers visited Yangyang International Airport, a 513 percent increase from 2013.

Yangyang’s success was largely due to the increasing numbers of Chinese tourists who want to visit the East Sea in Gangwon. The number of passengers on flights to and from China increased 433.2 percent last year over 2013, and the seat occupancy rate on those flights was above 90 percent last year, according to the KAC.

“It’s a positive sign that regional airports that have been in the red found new paths for growth,” said Saenuri Party lawmaker Kang Suk-ho after the National Assembly audit on the KAC last year. “The success of Yangyang airport is a result of cooperation that involves the KAC, regional governments and LCCs, so other airports in the red should have acute strategies to work with other parties.”

Other airports are also starting to rebound after making ties with LCCs to bring in Chinese tourists.

Passengers passing through Cheongju International Airport last year reached a record high of 1.7 million, up 23.5 percent from 2013, thanks to Eastar Jet, which added flights to Shanghai, Yanji, Harbin and Dalian in China. In the first half of this year, the airline plans to launch flights to Hong Kong from Cheongju.

Muan International Airport also saw a record number of visitors last year, at 178,414, which is a 34.5 year-on-year increase. It relies on T’way Airlines, which previously said that it will turn the airport into the transportation hub of the Jeolla region. After launching domestic flights to Jeju from Muan, T’Way said that it will fly to Tianjin, China, starting in April.

Daegu International Airport is hoping to bring in more traffic from T’way Airlines and Jeju Air, which started flying out of the city in March and July, respectively. Last year, the Daegu airport served 1.53 million passengers, a 41.7 percent increase from a year earlier. It was the first time since 2004 that North Gyeongsang’s largest city saw its airport users surpass 1.5 million.

This year, both Jeju Air and T’way Airlines are aiming to connect Daegu with China’s capital. Jeju Air said that it will start flying the Daegu-Beijing route three times per week starting Feb. 13, while T’way said that it will launch a flight to Osaka, Japan, on March 30.

While there are some success cases, many airports are still struggling. KAC data showed that the number of people passing through Ulsan, Yeosu, Gunsan, and Wonju airports dropped. Passengers at the Pohang airport declined 53.1 percent year-on-year, the biggest drop among all airports, but it was because the airport shut down in July for 18 months for the construction of a new runway.

Among the struggling airports, Ulsan is hoping to rebound this year when new carrier uSKY Air launches flights connecting it with Gimpo and Jeju airports in May. The company plans to operate two 50-seat Bombardier CRJ-200s.