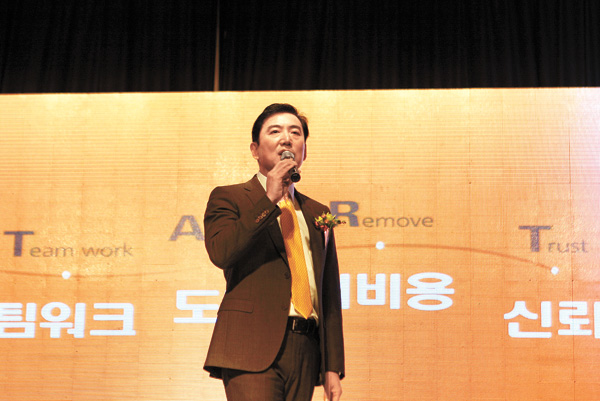 Jeju Air CEO Choi Kyu-nam speaks during the company’s 10th-anniversary celebration in Seoul on Monday. Provided by the company

The budget carrier, an affiliate of Aekyung Group, celebrated its 10th anniversary at Mayfield Hotel in western Seoul. The celebration was attended by Kim Seok-ki, president of the Korea Airports Corporation, and Eric John, president of Boeing Korea.

“The last 10 years of Jeju Air were about pushing the limits and getting through times of hardships,” said Ahn Yong-chan, vice chairman of Aekyung Group in charge of the aviation division. “With Jeju Air, consumers … are now at the center of the market and the open era of LCCs in Korea and Asia.”

For the next decade, the LCC announced its vision to increase sales by an average of 20 percent by 2020 and collect 1.5 trillion won in 2020 under its new “S.T.A.R.T” system, which stands for safety, teamwork, attempt, reduction and trust.

“The first step to achieving our goal is communicating with customers,” said Jeju Air CEO Choi Kyu-nam. “For the next 10 years, we will think like locals and establish a business model that facilitates communication.”

Choi said that success in China is the key to reaching its goals. Jeju Air is launching a Daegu-Beijing flight on Feb. 13, which will make it the first Korean budget carrier to fly to the Chinese capital.

“This year, we will completely change our marketing, sales and transportation in China for a fresh start,” he said. “All employees should be experts in China and we will reinforce education to prepare for the upcoming free skies era.”

Jeju also unveiled a plan to expand its network by stepping up its cooperation with travel agencies, hotels and car rental companies.

“We will focus on developing routes that have commercial value and expanding partnerships with various companies including other airlines,” Choi said.

The airline is preparing for its stock market debut in this second half, which will make it the first listed domestic LCC.