Chelsea pulls ahead of Liverpool 1-0

Chelsea pulls ahead of Liverpool 1-0 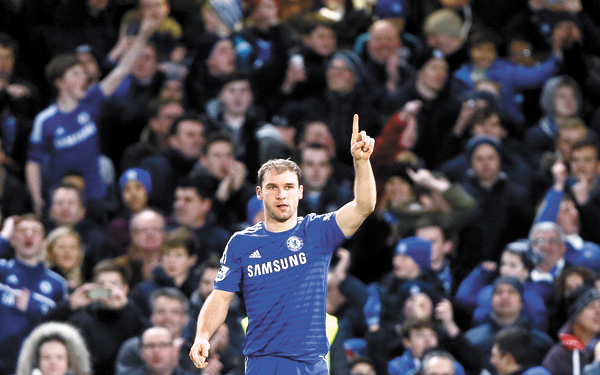 Branislav Ivanovic headed Chelsea into the League Cup final with a 1-0 victory over Liverpool on Tuesday, settling an enthralling semifinal in extra time.

After a 1-1 draw in the first leg, Ivanovic rose to meet Willian’s free kick in the 94th minute at Stamford Bridge to secure Chelsea’s progress.

“This is a game where we showed the real character of the team and we are happy, very happy,’’ Ivanovic said.

The Premier League leaders were fortunate to complete the heated and compelling game with 11 men after Diego Costa avoided punishment for stamping on Liverpool duo Emre Can and Martin Skrtel. With Costa risking a retrospective ban, Chelsea Manager Jose Mourinho defended his striker and blamed the media.

“What you call stamps and Sky [television] calls crimes, I have to say absolutely [were] accidental,’’ Mourinho told reporters.

By denying Brendan Rodgers a first final as the Liverpool manager, Mourinho can now prepare for the first since returning to Chelsea in 2013.

Chelsea, which won the competition in 2005 and 2007 under Mourinho, will discover its opponent for the March 1 final at Wembley Stadium on Wednesday. Tottenham leads Sheffield United 1-0 heading to Bramall Lane.

If there was any doubting the significance of England’s second-tier knockout competition it came with the teamsheet. Unlike on Saturday when a weakened Chelsea was humiliated 4-2 here by third-tier Bradford, Mourinho was taking this trophy more seriously.

Chelsea was back at full strength, with top-scorer Costa restored to the lineup. The Spain striker made his mark early on, by leaving a mark on Can’s right ankle. The stamp came in front of the benches and fourth official Phil Dowd, but Costa avoided even a yellow card.

“He could easily hurdle over the young player and he directs his studs right on to his ankle, which could’ve been nasty,’’ Rodgers said.

Costa was the aggrieved player in the 22nd minute when he was tripped by Skrtel and referee Michael Oliver dismissed the penalty appeal.

It was Mourinho’s goalkeeper, Thibaut Courtois, who preserved parity. The sprawling Belgian saved from Alberto Moreno and used his outstretched left leg to deny Philippe Coutinho.