Clockwise from left: A researcher tests a wearable battery on his wrist. A Kaist research team developed the world’s first wearable battery last year that automatically charges when it comes in contact with body heat; Baidu’s smart chopsticks; Scio, which detects the chemical content of a drink or meal. Provided by Netexplo

A locally developed battery that can be recharged using body heat has won a Netexplo Award, Unesco’s list of the top 10 digital innovations of the year, the organization said Thursday.

A research team from the Korea Advanced Institute of Science and Technology (Kaist) led by electrical engineering Prof. Cho Byung-jin demonstrated the technology in April.

Netexplo Awards are given annually to tech inventions worldwide that have had a major influence on human lives in areas such as energy, environment and education. About 200 IT experts vote to pick 10 winners.

The battery, which Kaist said can be installed in a wearable device, is the first of its kind that recharges automatically when worn. The battery is made of fiberglass with a thin piece of thermoelectric film and must be attached to the part of the wearable that comes in contact with skin. It can be used in pedometers or smartwatches. 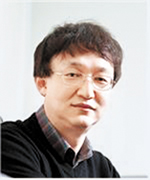 “We first want to commercialize this technology for wearable devices and hope to develop it for industrial use,” Cho said in an interview after the announcement. “The battery is designed to generate electricity from any kind of heat, for example, heat generated by cars, aircraft or factory machines so the technology may save costs for manufacturers.”

Cho and his team established a start-up called Tegway as part of Kaist to commercialize the battery.

Tegway hopes to finish developing the prototype battery in the first half of the year, and the start-up could then pitch the product to prospective customers. Mass production is scheduled for next year.

“About 30 global wearable device makers and IT giants in and outside Korea approached us about future cooperation,” Cho said. “I can’t disclose the exact names of the companies, but they expressed interest in working with us, using our batteries and developing wearable devices.”

According to KT’s economic research institute Digieco, global production of wearable devices is estimated to reach 485 million units in 2018, accounting for about 28 percent of all smart device production.

Other inventions that won a Netexplo Award were a pair of smart chopsticks that analyze the ingredients used in a dish, called Baidu Kuai Sou, and a mobile app that gives live updates on the spread of Ebola.

Another award went to a device called Scio, which is about the size of a cigarette lighter and can connect to a huge database to give users information about the chemical composition of a drink or meal, or check whether their medicine is genuine.

The awards ceremony will be held in Paris on Feb. 4.