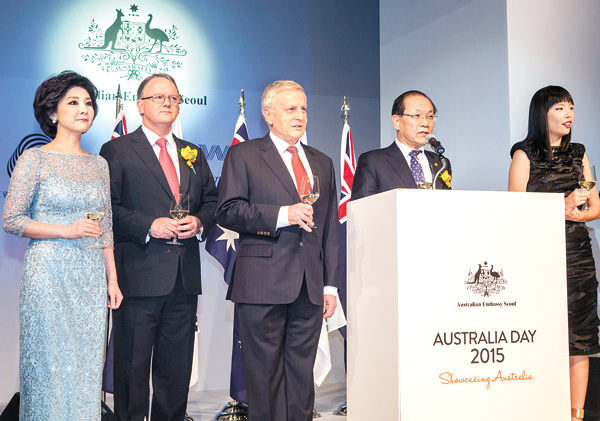 Hwang Woo-yea, second from right, deputy prime minister and minister for education, proposes a toast at the Grand Hyatt Hotel in Yongsan District, central Seoul, on Thursday, in celebration of Australia Day. At his left is Australian Ambassador Bill Paterson. By Park Sang-moon

For Australia’s diplomats in Seoul, this year’s Australia Day was the first big shindig since the Korea-Australia Free Trade Agreement (KAFTA) went into effect last December.

Australia Day marks the anniversary of the arrival of the first fleet of British ships in 1788. The 2015 Australia Day celebrations in Seoul had to be, in some part, an outreach to some 1,500 guests with ties to the country - and many more who will be moved to do business because of the free trade pact.

Unlike other embassy galas, where colorful traditional attire dominates the ballrooms, last Thursday’s event at the Grand Hyatt Hotel in Yongsan District, central Seoul, was saturated with black suits and figure-hugging dresses.

And food. Lots of food.

“With an entry into force in December of KAFTA, we want our guests tonight to experience some of what Australia has to offer as a nation, as a trade and an investment partner, and, as a diverse and dynamic culture,” proclaimed Australian Ambassador Bill Paterson in a welcoming speech.

Hwang Woo-yea, the deputy prime minister and minister for education, said, “I’d like to propose a toast to the eternal friendship and co-prosperity of the blood alliance of the Republic of Korea and the Commonwealth of Australia.”

The three-hour event, themed “Showcasing Australia,” was held three days after the actual holiday on Jan. 26.

Sam Hammington, an Australian who calls himself the first non-Korean comedian in this country, was the master of ceremonies once again for the second consecutive year.

Dami Im, an Australian singer of Korean descent and the winner of the fifth series of “The X Factor Australia” in 2013, performed five songs on a runway in the banquet hall, including “Gladiator” (2014) and “Super Love” (2014).

Im, who said she considers herself a Korean-Australian, revealed it was her second time in Korea after winning the show and that she’s currently preparing to release another single.

In between Im’s performances was a fashion show led by So, Wool, a wool brand under the GS Shop that featured Australian wool products. At another side of the hall was a small photo exhibition of fashion designer Lie Sang-bong’s visit to Australia last year to learn about indigenous art.