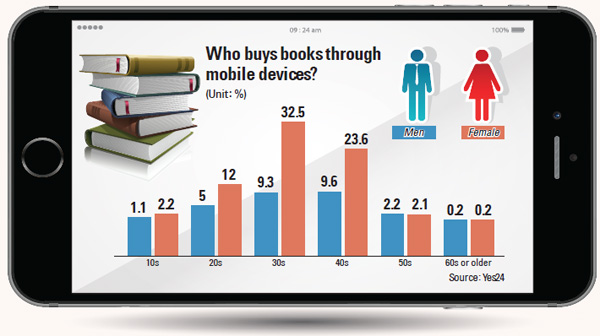 Shin Oh-yeong, a 38-year-old translator, has mainly used her mobile phone to buy books for the past two years.

She said it is because she can’t afford to waste any time as a working mother, adding that she usually purchases children’s books for her two daughters or textbooks and novels for herself while she’s on the move.

“When I’m reminded of some types of books I need to buy while I’m on the bus or subway, I just make a purchase immediately,” said Shin.

“It is good that I don’t need to physically go to a bookstore or sit in front of a computer for a while just to buy books.”

As more companies come up with smartphone applications and set up mobile payment systems, consumers can easily use such platforms to make instant purchases.

According to Yes24, one of Korea’s largest online bookstores, purchases made through mobile devices have jumped two-fold every year since it enabled in-app orders of books in March 2010.

Purchases from mobile devices took up merely 1 percent of the store’s sales in 2011, but this grew to 7.47 percent in 2012 and increased again to 15.24 percent last year.

Women in their 30s are the most frequent book buyers who use mobile devices, according to statistics from Yes24, deviating from the stereotype that the younger generation is more accepting of the latest trends in technology.

Almost 42 percent of all book buyers who use mobiles for purchases are in their 30s. People in their 40s come second at 33.2 percent.

“In the early days of mobile services, men in their 30s, who would consider themselves as early adopters, took up the majority of sales, but such a trend has disappeared as smartphones became more popular,” said Yoon Mi-hwa, a director at Yes24’s marketing team.

“The most aggressive and active buyers through mobile applications are working mothers in their 30s and 40s.”

Because the buyers are largely of a certain age and gender, the app predominantly sold books in the lifestyle and homemaking categories last year, according to the company.

Among the top-selling 100 books on the mobile application, 21 were publications from those categories. The second most popular category was child care, followed by foreign literature.

This is a clear contrast to Yes24’s online bookstore, as the most popular overall category on that last year was foreign literature.

Mobile buyers usually make purchases on Mondays as they tend to order in bulk at the start of the week. While the same pattern is seen among online buyers, the time when most orders are placed varies. Consumers who go to the bookstore’s website mostly make purchases between 10 a.m. and 11 a.m. before the cut-off point for same-day delivery, or between 3 p.m. and 4 p.m. after lunch.

But mobile buyers don’t show any special patterns as they even buy books after 9 p.m. on their way home after working late or in bed right before falling asleep. These late-night purchases make up 20.1 percent of all Yes24’s sales.