HSBC chief a true believer in Korea as renminbi hub

HSBC chief a true believer in Korea as renminbi hub 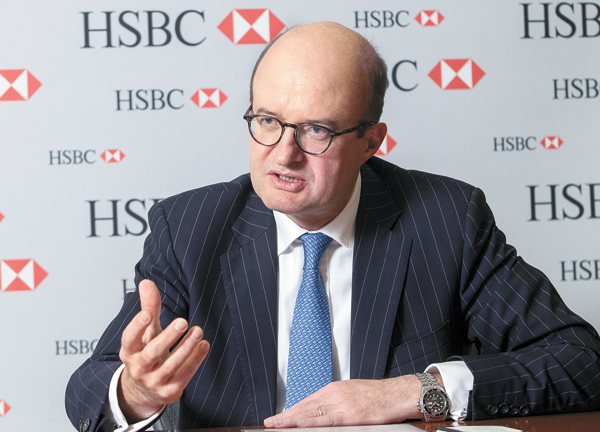 Martin Tricaud, CEO of HSBC Korea, is confident Korea can realize its dream of becoming a financial hub with the rise of the Chinese renminbi.

“We believe it is a once-in-lifetime opportunity for Korea,” Tricaud said in an interview with Korea JoongAng Daily on Jan. 23. “Korea is in a unique position with China from an economic perspective - very tight flow [of trade] and an underlying investment floor. Because of this unique position, it has been natural that Korea become one of the largest renminbi financial hubs.”

The French financial expert on global banking, who came to the Korean branch of HSBC in March 2013, is determined that the fourth-largest economy in Asia realize its potential to be a major financial hub in the foreseeable future.

In 2014, Korea became the largest provider of goods to China, ahead of bigger economies like the United States, Japan and Germany. “This is very important and meaningful,” said Tricaud. “For many years, there have been restrictions that hampered Korea’s progress as a financial hub. So far, it has been less successful than expected, but with renminbi, there is an opportunity.”

It would have taken a longer time for other countries to do so, but Korea is different, he said. The government has acted quckly to establish infrastructure for renminbi transactions since Chinese President Xi Jinping visited Seoul in July.

Tricaud said HSBC is committed to promoting the renminbi in Seoul by utilizing its experience in other countries.

“We have invested a lot of time and effort to promote the renminbi in Korea,” said Tricaud. “We have been focusing on educating the market by organizing large seminars and workshops to explain the benefits of renminbi use.”

HSBC also brought some innovation to the market, he added.

“HSBC was the first - and so far the only - bank arranging renminbi bond issuances for local banks,” he said. “We were the first in the market to do direct settlements for renminbi and Korean won through the Bank of Communications Seoul Branch. HSBC also was the first to get a quota allocation from the Chinese authority for a Korean asset manager to use the RQFII [the Beijing government’s renminbi qualified foreign institutional Investor] scheme.”

A. Last year was a very important year for us to reposition our business exactly where we wanted to be, what we call “global banking and markets,” which means servicing very large local international companies and foreign companies working in Korea. It also means working with local banks, non-bank financial institutions, public sector companies and large and medium-size companies. We wish to be the leading international bank in these segments, and I think last year we made a good progress toward that objective. [Shutting down retail banking] was a decision we had to make in the context of the global strategy of HSBC. We decided to withdraw from markets where we were sub-scaling. This year, a new objective will be continuity from last year, which means this year is about doing more and better. There is no revolution, and we will continue to do what we have been doing, but with more focus. There are always challenges and some headwinds. I think, to a great extent, challenges are opportunities to differentiate ourselves and to be more active and involved than other banks.

What values do you want to contribute?

We wish to focus primarily on playing off the strengths of HSBC. One of them is connectivity. We are in the position, which is quite unique, of having a very large network covering many countries that are primary countries for Korean companies. Korean customers are very keen to expand into ASEAN countries, China, the Middle East and Latin America. We wish to use this global HSBC network to service and support international expansion of Korean companies. That is a very important value. Within this context, we are focused on servicing our customers that do business with China and promoting the use of renminbi. This is a key priority, and we believe HSBC can help them a lot because we are very experienced in this area. We have done that in many other countries. We have quite a unique position with regard to renminbi.

Will the use of renminbi increase in Korea?

I think it will take some time, but it will. The 19th century was the time for the British pound, and the 20th century was for the U.S. dollar. And now the 21st century is the era of the Chinese yuan. Because China is going to become the largest economy in the foreseeable future and because of the connectivity between Korea and China, that should make Korea an important renminbi center.

How is HSBC contributing to Korean society aside from business?

We consider corporate sustainability integral to our culture. We are here to serve customers and society. So at the global level we have two key areas of focus in CSR: environmental protection and education. For as long as 18 years, we have been running camps for young people to learn about environmental protection. In education, we try to support organizations that promote financial education for underprivileged children. We work on projects to contribute to raising awareness of financial matters, so they can be better understood by young people and make them better prepared for financial challenges. Being a long-term partner of Korean society is what differentiates us from others. Our long-term partnership with society was recognized last year as we got a Best Sponsor in Seoul Welfare Award from the Seoul Metropolitan Government. We have been running HSBC Island Watch for a Future Generation, an environmental education camp for 14-year-old middle-school student and the HSBC Hope Scholarship program for 18 years. In 2013, we received the Socially Responsible Management for Co-existence Award from JTBC.

How can Korea improve competitiveness of the country’s financial industry through structural reforms?

We have seen some reform in renminbi internationalization. It was a very important reform and successful. So we see the announcement of the government reform in a positive way. My general sentiment about reforms is that what is needed in any country is better regulation rather than less regulation. The financial industry is a special industry. It needs to be regulated because the potential consequences could have a direct impact on people. There is a need to provide protection. But there is some room to promote the financial industry in Korea further. In European countries, there are bodies that are responsible for independently promoting the financial industry. In Paris, for example, there is an organization that promotes innovation in the financial industry. Quite a large of number of stakeholders create an ecosystem that forms a financial system, in which they work together, bring new ideas for financial innovation, express views on strategic objectives and new government initiatives. This brings the highest level of credibility as they speak with one voice. What some European countries have done successfully may provide some ideas for Korea.