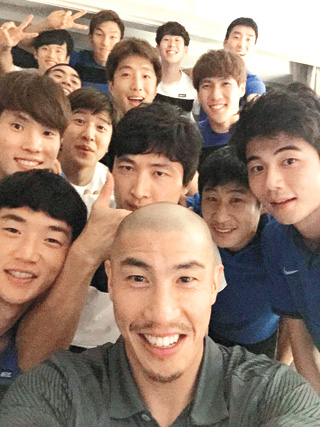 “Chaminator” Cha Du-ri, the national team’s solid right fullback and son of legendary footballer Cha Bum-kun, has retired with the warm and hearty support of his fans.

After finishing his last game with the national team - the AFC Asian Cup final on Saturday - soccer fans in Korea expressed their gratitude and support by making “Thank you, Cha Du-ri” one of the most-searched phrases on local web portals.

“My last football journey has ended,” Cha tweeted on Saturday along with a selfie of him and his teammates. “I am a really happy footballer.”

During the Asian Cup, the 34-year-old made spectacular breakthroughs and assisted on one of Son Heung-min’s goals in the quarterfinal match against Uzbekistan.

When visited by a JoongAng Ilbo reporter in 2012 while he was playing with Fortuna Dusseldorf, Cha said his career goal was to become a greater footballer than his father, who is a legendary striker in Korea and Germany, where he spent a decade and won two UEFA Cups.

But he was not on the national squad when Manager Hong Myung-bo led the team to Brazil last year. And when Korea lost the group match to Algeria, 4-2, Cha, who was working as a commentator, cried and said on TV he was “sorry that [older footballers] could not join the team because we weren’t good enough.”

In his last chance to follow his father’s achievement, second place in the Asian Cup seems to have given him another point. As the oldest member of the team, Cha played the entire 120 minutes of the final against Australia and was the most energetic player, even in overtime.

Defender Kim Jin-su blamed himself for letting through Tomi Juric in overtime, which led to James Troisi’s goal. Kim cried his eyes out, saying, “We could not give the title to Du-ri because of me.”

But Cha had no criticisms, thanking his teammates for doing their best. “Maybe my parents named me wrong,” he joked. “This is the third time the national team was ranked second because of my name, Du-ri.”

His older sister’s name is Ha-na, meaning first, and his younger brother’s name is Se-jji, meaning the third.

After spending 13 years with the team, he will play one more year with his club, FC Seoul. He then plans to earn a coaching license with the goal of managing a club in Europe.

Though he stepped down from the national team, Cha’s football journey hasn’t ended.