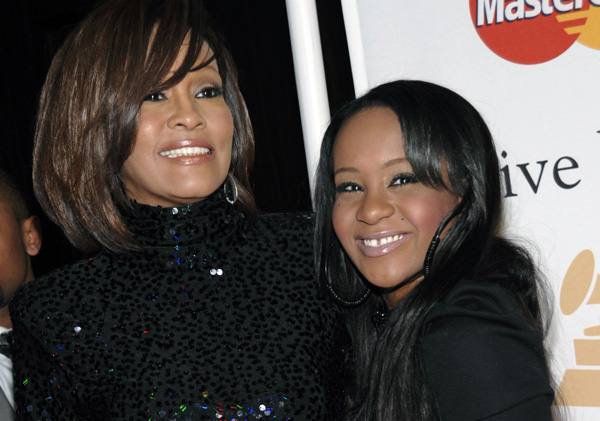 ROSWELL, Georgia - The parallels are haunting: Bobbi Kristina Brown, pictured right, and her mother, Whitney Houston, left, were both found face-down in bathtubs as the music industry prepared for the Grammy Awards.

Both lived in the constant glare of entertainment industry attention, both struggled with drugs; both married men criticized by family and friends as wrong for them.

As the pop star’s 21-year-old daughter lay hospitalized Monday, police in Roswell, Georgia, issued an incident report saying only that they were called Saturday to her home in suburban Atlanta in response to “a drowning,’’ and had secured the scene for investigators.

“Bobbi Kristina is fighting for her life and is surrounded by immediate family,’’ the Houston family said in a statement Monday. “We are asking you to honor our request for privacy during this difficult time. Thank you for your prayers, well wishes, and we greatly appreciate your continued support.’’

With no details forthcoming from police or family about her condition or what may have caused the tragedy, many people looked to see what she’s been posting online. Her last tweet, from Thursday, reflected obvious frustration over her failure to break out as an entertainer: “Let’s start this career up&&moving OUT to TO YOU ALLLL quick shall we !?!???!’’

Two days later, her non-responsive body was discovered, in circumstances eerily similar to her mother’s death.

On Feb. 11, 2012, just before the Grammys, Houston’s assistant found the singer’s lifeless body face-down in a foot of water in her tub at the Beverly Hills Hotel. Authorities found a dozen prescription drug bottles in the suite and listed heart disease and cocaine use as contributors, but concluded that she accidentally drowned.