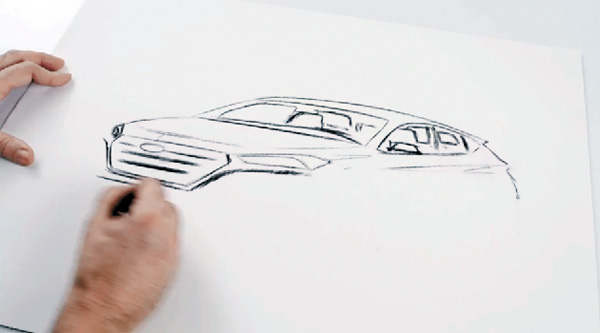 An image taken from YouTube of the sketch of Hyundai Motor’s new Tucson.

Hyundai Motor said Wednesday it will expand its presence in the highly competitive market for small-size SUVs with a new version of the Tucson.

The nation’s leading automaker unveiled the exterior design for the third-generation Tucson. The all-new Tucson is a full redesign of the second-generation Tucson ix, which was introduced in Korea in 2009. The first-generation model debuted in 2004 and the Tucson has become the automaker’s best-selling SUV globally, with about 154,000 units sold.

The new Tucson will be revealed at the Geneva International Motor Show that starts March 3, local time. The company said its vice president, Chung Eui-sun, 45, is scheduled to attend the show.

“As he did in 2013, Chung will meet buyers from Europe and discuss the company’s plans including environmentally-friendly vehicles,” said a spokesman for Hyundai Motor. “He might also speak about the new Tucson there.” 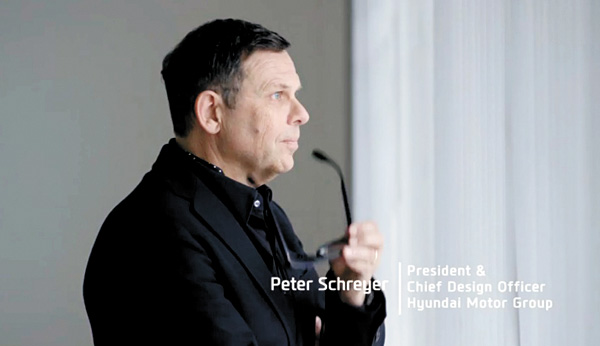 Along with the new Tucson design, the company released a 60-second teaser video on YouTube that shows Peter Schreyer, the company’s president and chief design officer, drawing the new Tucson. In the clip, he says, “We are about to introduce a new and very important model to the Hyundai lineup. It will be a big step forward for the Hyundai brand globally.

“Most importantly, the newest generation of hexagonal grille [that will be applied to the Tucson] is the brand signature for Hyundai.”

Along with the grille, the vehicle’s wheels are larger than the second-generation model and the headlights and taillights are new. LED fog lights have also been installed. The company added that the all-new Tucson has a seven-speed double clutch transmission developed by its auto parts affiliate Hyundai Dymos.

“We tried to develop a sharp body design that can be seen in the hexagonal grille and headlights,” Hyundai said in a statement. “We designed the Tucson for young customers in their 20s and 30s, which is the major consumer group for compact utility vehicles.”

The company said the SUV will likely go on sale in Korea in March after the Geneva International Motor Show. It will be available with a 1.7-liter or a 2-liter engine. The 1.7-liter model is expected to start at about 20 million won ($18,440). Its average fuel efficiency is 15 kilometers per liter (35 miles per gallon), according to the company.

With the new Tucson, Hyundai is hoping to rise ahead of its competition in Korea’s compact utility vehicle market, which is led by Renault Samsung’s QM3 and Ssangyong’s Tivoli.

The QM3, which came out in December 2013, has led RSM’s sales. The company only planned to sell 8,000 QM3 last year, but has far surpassed its goal with 18,191 units sold thanks to its unique design that appealed to young customers and its fuel efficiency of 18.5 kilometers per liter.

In January, the nation’s smallest automaker, Ssangyong Motors, unveiled its new SUV, Tivoli. After starting sales in the middle of the month, it sold 2,312 units before Jan. 31, the most among all small SUVs, beating the QM3 by 1,642 units. Ssangyong added that it had received more than 7,000 orders for the Tivoli by the first week of February.

The new Tucson will be a bit more expensive than those two SUVs, but the company said its driving performance will appeal to customers.

Small SUVs are expected to remain popular this year, and industry insiders predict the SUV market will grow by 10 percent.