Huh to serve third term as chair of FKI

Huh to serve third term as chair of FKI 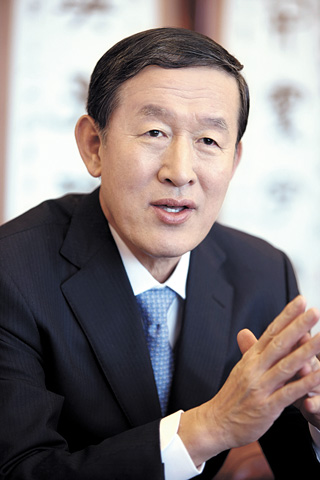 Huh Chang-soo, chairman of the Federation of Korean Industries (FKI), will serve a third term, the institution announced Thursday.

Huh is also the chairman of GS Group.

He became chief of FKI - the largest business lobbying organization in the country - in February 2011.

After Hyosung Group Chairman Cho Suk-rai, Huh is the second FKI leader to serve three terms in a row.

The FKI members unanimously recommended Huh as the 35th chairman, the organization said. The association has no limit on terms.

Huh mentioned several times last year he has no intention of serving another term. His chairmanship was set to end on Feb. 10.

The FKI was looking for a replacement for Huh, but failed to find a good fit.

Cho Yang-ho, chairman of Hanjin Group, was a candidate, but he was removed from the list after the recent nut rage incident last year involving his daughter, Cho Hyun-ah, a former vice president of Korean Air.