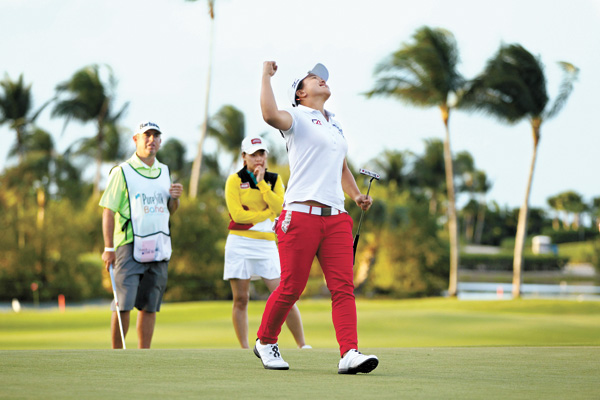 “Just before the last putt I was super nervous, but I was fine,” Kim said.

Kim did not make the cut in Florida.

The 22-year-old shot a 1-under 72 in the completion of the delayed third round and closed with a 68 to match Yoo and Jutanugarn at 14-under 278 on Atlantis Resort’s Ocean Club course.

Kim birdied the par-5 18th in regulation, chipping from the front greenside rough to three feet - to earn the last spot in the playoff. She won on the hole a few minutes later.

A five-time winner on the Korea LPGA, Kim tied for sixth at the LPGA Tour’s Q-school to earn a card. She played in four playoffs in the KLPGA, winning all of them.

“I joined the LPGA in hopes of making the Korean Olympics team,” said Kim. “This is one step toward that. So this means a lot to me.”

She’s projected to move from No. 40 to No. 23 in the world. Baek Kyu-jung is currently the fourth and final South Korean player in the Olympic rankings at No. 11.

When she played in the KLPGA, she was nicknamed “queen of the come-from-behind victory” because that’s how she won all of her five titles in Korea.

In the Bahamas, she was true to form, starting the final round in sixth place.

One of Kim’s strengths is her long tee shot. The 5-foot-3 golfer was recognized as the domestic tour’s longest driver for the past two years, probably because of her experience in taekwondo.

She practiced martial arts with her father, a taekwondo instructor, until middle school.

Her drives typically travel about 270 yards, which is similar to that of American power hitter Lexi Thompson, who is much taller than Kim.

Lydia Ko tied for seventh at 11 under in her first event as the No. 1 player in the world.

Second-ranked Park In-bee had a chance to take back the top spot from Ko, but closed with a 72 to tie for fifth at 12 under.

“I saw the news or the projections about how it would change, but I didn’t really think about it,” said Ko. “To me, it was more important to try to make a lot of good putts and a lot of good birdies.”

Gerina Piller topped the leaderboard at 10 under until the third round, but finished the tournament tied for seventh by firing 3-under 70 in the final round.