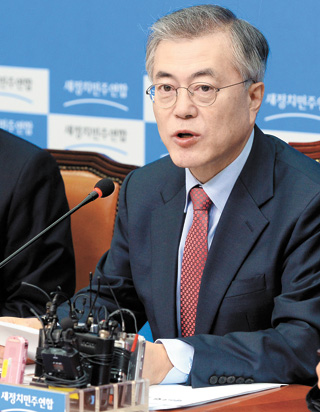 Opposition party leader Moon Jae-in proposed to the ruling party on Friday that lawmakers conduct a joint public poll to determine whether to approve the nomination for Lee Wan-koo for prime minister, a suggestion that caught the Saenuri Party by surprise and drew immediate protest.

A day after the New Politics Alliance for Democracy (NPAD) and the Saenuri agreed to postpone a plenary session to Monday that will include a vote on Lee’s nomination, Moon said his party would unconditionally accept the results of the joint survey.

If Lee’s nomination is approved, he would be the presidential cabinet’s second-in-command.

“If the ruling party interprets our demand [for Lee to bow out] as being politically motivated, then we propose taking a joint survey regarding his nomination. We are prepared to accept the outcome,” Moon said during a supreme council meeting on Friday.

He also continued to call for Lee to voluntarily bow down, citing a raft of allegations directed against the veteran politician that range from real estate speculation and draft-dodging to his questionable philosophy on freedom of the press.

Moon’s demand that both parties conduct a poll to decide Lee’s fate comes as public favor for Lee as the prime minister candidate has soured.

In a poll conducted by Gallup Korea that questioned 1,010 adults between Tuesday and Thursday, 41 percent of respondents said that Lee was unfit to serve as prime minister, while 29 percent approved of his nomination.

The first figure is a dramatic jump from an earlier survey conducted late last month, when President Park Geun-hye named Lee as the next nominee for prime minister. At that time, only 20 percent disapproved of his nomination.

The main opposition’s call for a public poll likely hinges on the party’s assumption that public opinion toward Lee will only continue to deteriorate, which would put mounting pressure on Saenuri lawmakers if they continue to endorse him.

On Friday, Moon also slammed the Blue House for what he described as its continued failure to properly vet three nominees for prime minister, referencing its two previous appointments, who were both forced to bow out amid growing concerns over their ethics.

“It just seems bizarre that no one at the Blue House is taking responsibility for yet another bungled personnel appointment,” Moon bluntly stated.

The opposition party’s proposal resulted in immediate backlash from the Saenuri, which considered such demand “undemocratic and irresponsible” and a “total about-face” from the bipartisan agreement reached a day before to open a plenary session on Monday, when they would proceed to put Lee’s nomination to a vote.

“It has been mere hours since both sides reached a difficult agreement, each making concessions,” lamented Rep. Yoo Seong-min, the Saenuri’s floor leader. “It’s regrettable that the opposition leader has backtracked on his word after just one day.”

Saenuri spokeswoman Kwon Eun-hee also amped up criticism aimed at Moon, saying it was “at the height of populist ideas” to select a prime minister based on a public opinion poll.

Given the ruling party’s objection, it is highly unlikely that the NPAD can persuade the Saenuri to carry out a public survey, though it is nevertheless expected to continue its demand for Lee to withdraw his nomination.

It is also possible that the Saenuri will resort to railroading Lee’s confirmation on Monday in the face of the NPAD opposition using its parliamentary majority with 158 National Assembly seats.

Lee’s approval is critical for the Blue House, which is already troubled by a worryingly low public approval rating.

Moon’s rather abrupt gambit Friday could be interpreted as the first test of his political astuteness as the head of the country’s second-largest party.

Yet even if Lee manages to overcome mounting opposition to his appointment to become prime minister, questions remain over whether he would be an effective senior cabinet member with the authority to challenge the president when necessary.

Over the past two weeks, his image as a reasonable and moderate politician has been tarnished by a string of allegations concerning ethical breaches, calling into question whether he is fit to fill the role.