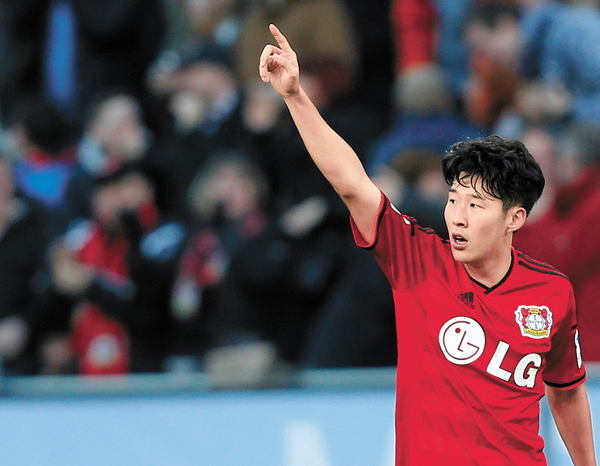 Leverkusen’s Son Heung-min celebrates after scoring his side’s third goal during the German Bundesliga match between Bayer Leverkusen and VfL Wolfsburg in Leverkusen on Saturday.[AP/NEWSIS]

Though Bayer Leverkusen lost the match 5-4 after Bas Dost’s injury-time winner, Son broke his own record for goals scored in one season by netting his 12th, 13th and 14th goals. His previous record was 12. It was also the 22-year-old’s second hat trick after he became the first Korean footballer to score one in a European league in November 2013 against Hamburger SV, where he previously played for six years.

Son is now tied for ninth highest scorer in the league with eight goals along with Robert Lewandowski of Bayern Munich, Shinji Okazaki of FSV Mainz 05, and Pierre-Emerick Aubameyang of Borussia Dortmund.

In Leverkusen, Dost opened the scoring with a diving header in the sixth minute and Naldo made it 2-0 with a free kick in the 17th. Dost claimed his second by getting the outside of his boot to Kevin de Bruyne’s cross in the 29th.

Leverkusen Coach Roger Schmidt responded by making all three substitutions at the break. Son pulled one back in the 57th, despite Wolfsburg protests that he kicked the ball out of Diego Benaglio’s hands. Then he scored again five minutes later. He received a long pass from behind, and dodged Wolfsburg defenders and the goalie to redirect the ball to the left and then put it in the net with the next touch.

One minute later, Dost completed his hat trick by connecting with the end of Ricardo Rodriguez’s cross, only for Son to answer by completing his own hat trick four minutes after that. Unmarked on the right flank, he dribbled into the center and fired a strong shot with his left foot.

Bellarabi leveled the score in the 72nd, but Leverkusen was holding on after Spahic’s sending off and Dost sealed the win in the 93rd.

“We did really well in the second half and caught up with Wolfsburg,” said Son after the match. “But if we allow a goal in the last minute and lose, all we get is the bitterness of defeat.”

Leverkusen lost at home, but Son’s spectacular performance on Saturday stunned his home country. His three goals in 10 minutes were reminiscent of the way Cha performed in his prime.

Cha is well known for his hat trick in 1976 in which he scored three goals in five minutes during the Korea Cup, also known as the President’s Cup Football Tournament. The opening match of the international tournament was between Korea’s first-tier team Hwarang and the Malaysian national team. Hwarang was trailing 4-1 when Cha scored three goals in the 38th, 42nd and 43rd and dramatically equalized the game.

Cha holds the record for most goals scored in a season by a Koreans in a European league, for his 19 goals scored in the 1985-1986 season with Leverkusen. Son is only five goals away from Chas record and Leverkusen has 15 matches remaining before the season ends in May.

On Saturday, Leverkusen will face FC Augsburg, where Korean striker Ji Dong-won plays. Ji was included in the starting line up three times in a row in recent games but has not scored.