Incheon is No. 1 airport for 10th year in a row

Incheon is No. 1 airport for 10th year in a row 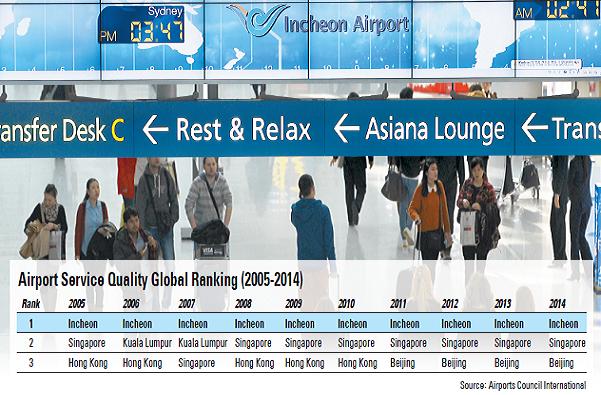 Airports Council International (ACI), an international trade association of global airports headquartered in Canada with more than 1,800 member airports in 177 countries, announced on Monday local time that Incheon airport had become the world’s first airport to top the ranking for Airport Service Quality for 10 years straight. It scored 4.97 out of 5.

ACI ranks airports based on a survey of 550,000 passengers each year. The passengers evaluate their experience in 34 service categories, including convenience, check-in, security, facilities, food service and airport management.

Incheon landed in at No. 1 for the first time in 2005, just four years after it opened.

“Despite its humble beginnings as a gate to a small East Asian country at the edge of the world’s attention, Incheon airport has maintained its position as the world’s No. 1 airport in service quality for the past 10 years,” said Park Wan-su, CEO of Incheon International Airport.

“I would like to express my appreciation to our 40,000 airport employees for their effort and dedication, which are the main components of our quality service.

“From now on, we want the airport to be the world’s best not just in service but also in all areas of airport management. The airport will keep striving for quantitative and qualitative growth,” Park added.

The airport also maintained the top position in ACI’s rankings based on region and size.

Among the world’s large-size airports - those with more than 40 million passengers per year - Incheon came in first place just a year after making it into the category, beating Singapore and Beijing international airports again.

And Incheon has managed to maintain its high-quality services despite huge growth in recent years.

The airport’s passenger traffic grew 1.7 times over the past nine years, to 45.5 million annual passengers last year from 26 million in 2005, according to the airport.

When it opened in 2001, Incheon airport had just 47 carriers flying to 109 cities. It has grown by an average of 6.7 percent every year and is now connected to 182 cities. It had 88 partner carriers as of last month.

However, according to Park, Incheon must work hard to keep ahead of its fellow Asian counterparts in terms of bringing in transfer passengers.

As of last year, Incheon International Airport still held the largest share of transfer passengers with 7.25 million people passing through, but Singapore’s Changi Airport and Beijing Airport are also known for their quality duty-free stores that entice flyers to stop off there.

In hopes of grabbing more transfer passengers, Incheon is in the process of strengthening its network of transfer routes. The airport brings in more carriers by giving incentives.

To serve transfer passengers, the airport is also working on improving its services in transfer areas.