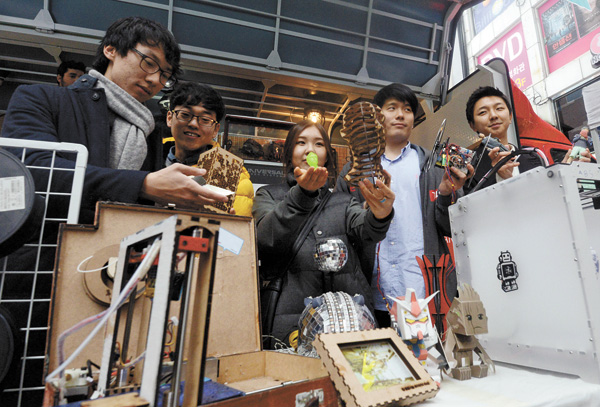 People display prototypes they made on 3-D printers in the Fab Truck in Daejeon on Monday. Provided by the company

SK Group, the mentor company partnered with the Creative Economy Innovation Center in Daejeon, has introduced a moving factory with 3-D printers to boost creative ideas from the public.

The conglomerate and the innovation center announced Monday that it had worked with the TIDE Institute, a local company that works with start-ups and is led by the first Korean to pass astronaut training, Ko San, to open the “SK & Tide Fab Truck” in Daejeon.

The group said the Fab Truck is equipped with three 3-D printers, a high-function scanner and razor cutters worth more than 100 million won ($90,700). Putting all the equipment into a truck gives the advantage of mobility and better public access.

“The Fab Truck was introduced overseas starting in the mid-2000s following the trend of DIY [Do It Yourself] and start-ups, but this is the first time in Korea that such a facility has been opened to the public,” SK Group said in a release.

The conglomerate said the truck will go to college campuses and places where small and medium-size enterprises (SMEs) are concentrated so that people can experience the truck and make a prototype of their idea.

People who want to use the free equipment on the truck can check the vehicle’s schedule on the website of the Daejeon Creative Economy Innovation Center.

The truck is an extension of the Fab Lab (Fabrication Laboratory) inside the Daejeon center. Since October, more than 150 prototypes for the product were manufactured at this lab and its has been a popular place for those who are planning for start-ups.

In Seoul, the conglomerate and the TIDE Institute have been supporting start-ups at the SK Fab Lab Seoul since late 2013.