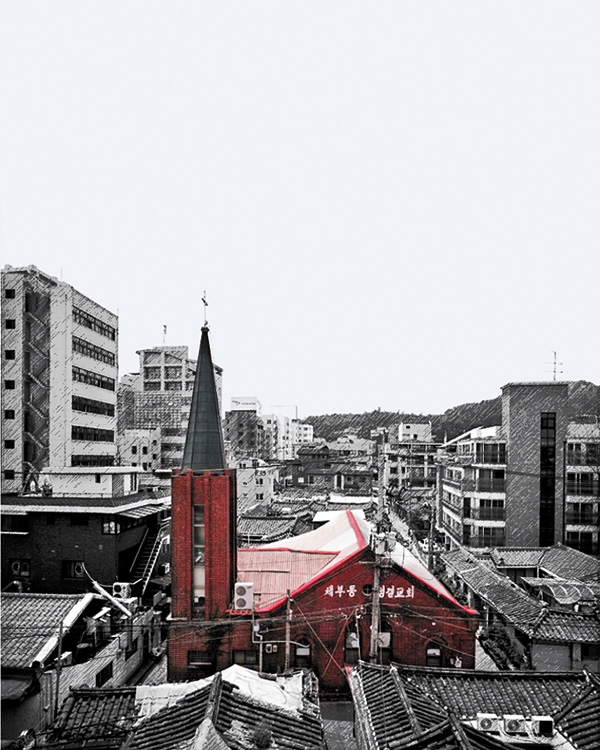 Chebudong Holiness Church is facing an uncertain fate in Seochon, central Seoul, after nearly a century. Many residents are moving as the number of tourists is booming. Provided by Lee Jang-hyeon

Chebu-dong Holiness Church, probably the most historic brick building in central Seoul, is at a crossroad between preservation and destruction.

The 95-year-old building is considered a cultural asset demonstrative of the progressive characteristics of the jungin, or middle class - the second highest-ranked position in the four-class caste system of the Joseon Dynasty. The church is also a rare case of multiple styles of brickwork used in a building.

Built after the Joseon Dynasty, Seochon, located west of Gyeongbok Palace and also the town where the church is located, was traditionally a residence for jungins.

“The steeple would not have been erected if the church was in Bukchon [north of Gyeongbok Palace],” said National Trust Joint Representative Kim Won. “The church was able to be built right next to the palace because Seochon has accommodated more open-minded, middle-class lifestyles for centuries.”

Last summer, the church proposed the Seoul Metropolitan Government buy it for 2.6 billion won ($2.36 million) because the town is drawing more tourists despite a steady decrease in the number of residents. The offer was also much cheaper than the market price, which is about 4 billion won, but the building would be preserved.

Although the city government could not make a decision right away, a Chinese national offered 5 billion won for the church.

However, the church thinks preservation would be a much more valuable option than profit.

The church is notable for its various styles of brickwork. When the small oratory was extended into a church in 1931, it was built with what is called a Flemish bond by Westerner missionaries. After Korea was liberated from Japan, the church was again extended in a different style, English bond. Eventually it was remodeled in the style of Stretcher bond.

A window in the church is also a reminder of a time of gender inequality. It was originally a smaller entrance for women. Only men could use the main entrance.

“The church shows that people began to directly interact with outside world without Japanese authority,” said Ahn Chang-mo, a professor of architecture at Kyonggi University, who is also advising the Seoul government to buy the church.

Why is the future of this historically significant church challenged? “Residents are leaving the town,” says Han Cheol-gu, a local flower shop owner. Cafes and restaurants are rapidly replacing old stores, a natural consequence of the recent rent hikes.

“Countless couples visit the area for dates,” said Chebu-dong Church’s head pastor Yeom Hee-seung, “but there are no kids playing around in the area now. It’s been difficult to operate the church in the last two to three years.”

The local government has tried to preserve Seochon. Former Seoul Mayor Oh Se-hoon made a declaration that he would preserve hanok, or Korean traditional houses, in central Seoul, and the incumbent Mayor Park Won-soon’s plan to restore historical objects in the capitol’s central area also targets towns around Gyeongbok Palace. Chebu-dong Church is one of 210 buildings designated for conservation in Park’s plan.

Governments are increasingly paying attention to the area around Gyeongbok Palace. There are four parties related to the sales of the church: the Seoul Metropolitan Government’s Housing Construction Bureau; Urban Regeneration Headquarters; the Ministry of Culture, Sports and Tourism’s Cultural Asset Division; and the Cultural Policy Division. But the church is still uncertain of the city government’s position on its future.

“It is a paradox of bureaucracy because specialized and departmentalized organization is actually delaying the decision-making process,” said Yeom.

The price of the church is also controversial considering the real estate values in the area.

“Buildings located in smaller alleys of the town, like the church, run about 30 million won per pyeong [35.6 square feet],” says Park Dae-beom, director of real estate consulting firm Taegyeong Partners. “But given that the church is in the limited development district, the price will be lower than that.”

The 142-pyeong church is worth about 4.24 billion won if applying 30 million won per pyeong.

But some others say the land price of the town has rapidly increased tenfold in the last 15 years. “Whoever becomes the next Seoul Mayor, they will try to preserve Seochon,” said executive director Jang Yeong-seok of Arumjigi, a cultural preservation organization. “But it will paradoxically heighten the value of the town. The 5 billion won deal offered by the Chinese national will probably be cheaper than the market price in a few years.”

Cultural heritage organizations such as the National Trust and Arumjigi are proposing cooperation between the public and private sectors.

“The Seoul government can consider paying for half of the cost while allowing the private sector to pay the other half,” said Kim Geum-ho, secretary general of National Trust of Korea.

A new law dealing with traditional buildings, which is to be enacted in June, states that individuals or organizations that buy assets for preservation can be supported by public institutions.

Another solution is to use the building as a public facility as the Spanish and Italian governments try to do. An official of the Jongno District Office said they are “considering using the church as a base for an economic boost for the area,” but under the condition of “financial support from the Seoul Metropolitan Government.”