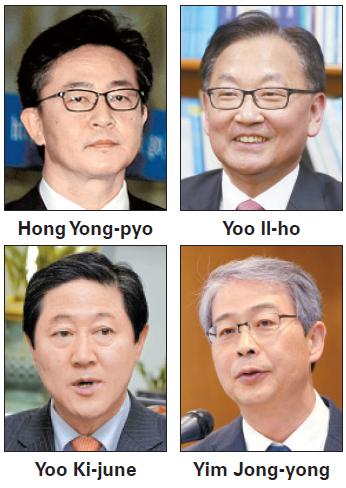 President Park Geun-hye on Tuesday carried out a minor reshuffle, nominating three new ministers and a chairman for the Financial Services Commission, a top financial watchdog.

She also accepted the resignation of Kim Ki-choon, the presidential chief of staff, said Yoon Doo-hyun, the senior presidential secretary for public affairs, in a briefing.

The new chief of staff will be announced after the Lunar New Year holiday “at an appropriate time,” Yoon said.

Kim had become a liability for the president and was considered a source of problems at the Blue House, including poor public communication skills and numerous botched appointments. 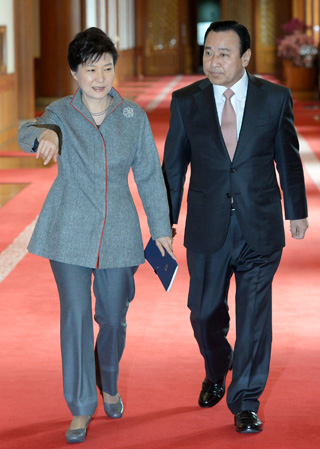 The nominee for unification minister is Hong Yong-pyo, a former academic and current Blue House secretary for unification issues. Yoo Il-ho, a two-term lawmaker with the ruling Saenuri Party, was nominated to become the land minister, and Yoo Ki-june, a three-term lawmaker with the Saenuri, was nominated to become the oceans minister.

Yim Jong-yong, the current chairman of Nonghyup Financial Group and a former technocrat in the finance ministry, was nominated to replace Shin Je-yoon as chairman of the Financial Services Commission, according to the Blue House.

All four nominees have to undergo confirmation hearings at the National Assembly.

The reshuffle came hours after Park’s official appointment of Prime Minister Lee Wan-koo at the Blue House earlier in the morning. Lawmakers confirmed him in a vote of 148 to 128 the day before.

Hong, the unification minister nominee, is a relatively obscure figure to the general public. The former academic assumed a public post only two years ago and has kept a low profile due to the nature of his role.

He joined Park’s transition committee in January 2013 and has worked as the presidential secretary for unification since February 2013 with the launch of the Park government.

“A former professor, Hong is considered a well-qualified figure to resolve the pending issues surrounding inter-Korean relations with a deep understanding of the current administration’s inter-Korean policies and philosophy, and he has a rational personality,” said Yoon, the senior presidential secretary for public affairs.

Hong, who will replace Ryoo Kihl-jae, previously served as a professor of political science and diplomacy at Hanyang University.

He received his Ph.D. in international relations from Oxford University and has worked as a research fellow at the Korea Institute for National Unification.

The replacement of Ryoo signals the government’s intention to pursue a breakthrough in long-strained inter-Korean relations. Ryoo admitted in a lecture last Friday that Park’s so-called trust-building process on the Korean Peninsula had made “little progress” in the past two years.

Representative Yoo, named to head the Ministry of Land, Infrastructure and Transport, is a former economist who later served as chairman of the Korea Institute of Public Finance. Dubbing him an “economy expert,” Yoon said the candidate’s leadership capacity is highly recognized.

The presidential office said Yoo Ki-june is equipped with expertise in oceans and fishery matters given his former career as a lawyer specializing in that field. He joined to run as a lawmaker in 2004 for the Grand National Party, the predecessor of the Saenuri Party.

He will succeed Lee Joo-young, who was commended by the president for his contribution to handling the aftermath of the sinking of ferry Sewol last April but was defeated in a party election for floor leader earlier this month.

Both of the lawmakers belong to the pro-Park faction within the party. Should they be officially appointed, one-third of 18 minister-level posts in the Park government will be occupied by former politicians from the governing party, including its lawmakers. Yim Jong-ryong, nominated to head the FSC, is a former government official. He served as the presidential secretary for economy and finance, first deputy minister of finance and minister in the Prime Minister’s Office before being named to chair NH Financial in June 2013.

When queried by correspondents about the fate of Kim Ki-choon, Yoon, the senior presidential secretary, said, “Despite many difficulties, Chief of Staff Kim has been sacrificing himself for the nation and the president, and he has tendered his resignation several times so far. I am aware the president has accepted the resignation this time.”

Kim’s replacement along with some other posts at the Blue House will be announced after Sunday at the earliest, Kim added.

Rumors and speculation about Chief of Staff Kim, a 75-year-old former prosecutor in the administration of Park Chung Hee, President Park’s father, have been rampant since the end of 2013. Due to the president’s heavy reliance on him when it comes to making serious decisions and his excessive loyalty, politicians and the media have long pressed President Park to clean house by getting rid of him. Public opinion about him was sour, too. According to sources within the political community and the Blue House, the search for appropriate figures to succeed Kim began a few weeks ago. A few pro-Park figures including former prime ministers, ministers and politicians are known to be on the list.

Meanwhile, Park told her new prime minister when presenting a certificate of appointment, “I expect you will perform excellently with ample experience and leadership when impending economic innovation tasks are piled up.”