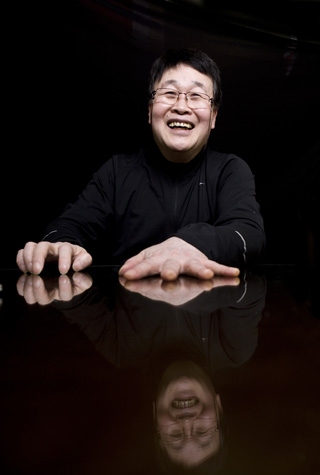 The fingertips of singer Song Chang-sik are calloused because the 68-year-old singer has been practicing guitar every day for the past 50 years. By Kwon Hyuk-jae

If last year’s music scene was all about the return of old boys from the 1990s, this year’s music industry will be concentrating on the sounds of the 1960s and ’70s, when folk music was mainstream.

And in the middle of that nostalgic trend is musical hall C’est Si Bon.

C’est Si Bon opened in 1953 in Mugyo-dong, Jung District, central Seoul. Until its closure in 1969, Korea’s first music hall was a hangout for musicians like Song Chang-sik and Cho Young-nam, who represented popular culture of the ’60s and ’70s.

Song, Cho and other regulars of C’est Si Bon are still spotted sporadically in the music scene today. C’est Si Bon was the only place back then in which ordinary people could listen to pop songs. 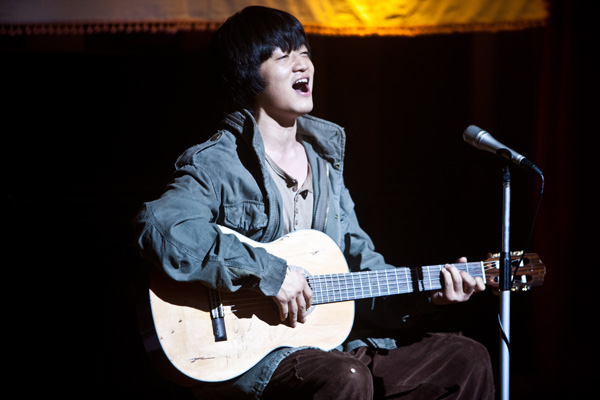 Actor Cho Bok-rae acts the role of Song Chang-sik in the film “C’est Si Bon,” which is centered on a music hall that opened in 1953 in Mugyo-dong, central Seoul. The music hall has produced outstanding singers of the 1960s and 1970s such as Song.

“K-pop or the Korean Wave would not exist today [without C’est Si Bon],” recalled Lee Baek-cheon, a music critic and a former producer who worked for the now-defunct broadcast channel TBC, during an interview with the JoongAng Ilbo. The interview was conducted last September.

“They [singers who performed at C’est Si Bon] were the first generation of Korean singers who began to write and sing songs,” he added.

Song is also credited for opening a new chapter in folk music.

Although the film walks a fine line between fiction and non-fiction by adding in a third figure to Twin Folio, the film entertains filmgoers with a catalogue of folk songs from the ’60s and ’70s during its two-hour running time.

Here are excerpts from an interview with the 68-year-old Song, who still plays guitar for hours every day.

The interview was held earlier this month at a small room in Ssonger, a live music cafe located in Sinjang-dong, Hanam, Gyeonggi.

A.I was impressed by his singing. In the past, actors didn’t put much effort into singing even though they were doing a musical film, but Cho was different. To be honest, I was dubious about the film because it tells of a simple story that happened about 50 years ago. I was pleasantly surprised by the outcome.

You formed Twin Folio with Yoon in 1968. What was it like to see a younger version of yourself in the film?

If you could go back to the days when you were in your 20s, would you?

No thanks. I’m content with my life. But if I had to go back, I would choose to live alone rather than getting married.

C’est Si Bon belongs to an era of people who are now in their 50s and 60s, but it keeps inspiring singers, TV shows and even films.

People may feel nostalgic with songs from those days, but I don’t have entirely good memories [of them]. That’s one reason I didn’t reunite with Yoon under the name of Twin Folio.

All the hits like “White Handkerchief” and “Wedding Cake” were adapted songs. It would be more accurate to say that people liked our music because there was nothing to enjoy back then other than those songs. Koreans usually love to eat yeot [traditional Korean confectionery] or drink sikhye [traditional sweet rice beverage], but we suddenly gave them chocolates. But those chocolates were fake ones that looked like real chocolates.

You majored in vocal music.

I got a scholarship when I entered Seoul Arts High School, but I decided to drop out when I was a sophomore because I couldn’t afford to pay for vocal lessons. After quitting, I began to study all the basics of music such as harmonics and counterpoint as I spent most of my time at libraries and secondhand bookstores. That was when I decided to live for music, although I was living like a beggar.

You were recognized because of Twin Folio but “Piri Bunen Sanai,” one of your hits, became a turning point in your career.

I suddenly had to join the military when I began to build up my career as a singer. I was supposed to be exempted because my father passed away during the Korean War while he was serving as a police officer. But I had to join anyway. I think I paid for fame. But I was able to transition into music thanks to two shows I watched during that time. One was a blues singing competition that was held by African-American soldiers who were based in Korea and the other one was Jeonju Daesaseupnori [a competition for gukak performers in which participants compete against one another by performing traditional Korean musical instruments]. Those were competitions for amateurs, but I realized there were more people who are musically accomplished than I was. I doubted my musical ability and cried a lot, too. I thought I needed to learn about traditional Korean music, too. And then I made “Piri Bunen Sanai” [meaning a man who plays a double-reed instrument].

After your military service, your career reached a peak with the release of “Piri Bunen Sanai,” and a couple of more songs became huge hits after that. But you soon became entangled in a series of scandals. You were involved in a marijuana scandal in 1976 and were imprisoned in 1977 for violating the reserve forces act.

I was in prison for about 20 days and I studied how to arrange jazz songs in that cell. I didn’t have time to learn about it until I got imprisoned. [Thanks to the imprisonment], I was able to arrange almost all songs since then. I wanted to know every tiny bit of music, and that is my motto.

No. I just jot things down when I come across melodies and lyrics. I’ve been playing guitar for about two hours every day for the past 50 years. If you skip practicing just one day, you lose control of your guitar. I’ve never seen a musician who is trying as hard as me.

You perform for five days at this live music cafe. But the stage seems a little small for you.

There are about 180 seats and this was designed for myself. I was involved in every process of building this live music cafe, from designing the stage to construction to inspection. I studied computer-aided design for five years because I wanted to build my own house. This type of live music cafe is the best place for singers like me. You have different a audience and a different vibe every day.

You also assemble your own computer.

I return home around 2 a.m. [after a live performance] and then I turn on my computer when I don’t feel like sleeping. And I check all the latest computer parts so that I can keep my computer updated all the time. A computer is very logical and music is the same. You can’t create music by just resorting to your sensibility. You have to polish your skills every day if you want to produce the best kind.