Industry awaits the sale of Pantech

Industry awaits the sale of Pantech 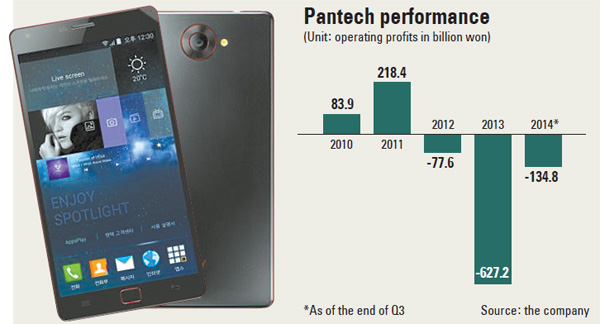 Korea’s mobile industry is awaiting word as soon as today on the sale of Pantech, which is currently under its second court receivership in the past two years.

Seoul District Court is expected to approve the sale of the nation’s smallest smartphone vendor to a consortium led by U.S. equity investor One Value Asset Management.

According to the court’s bankruptcy division late Monday, Pantech and One Value Asset Management were still negotiating details of the acquisition as the U.S. investor has been pushing for a private, rather than public, sale.

Although a private contract could raise questions of fairness, the court accepted the request since only one potential buyer has expressed interest in Pantech.

Last September, Seoul Central District Court announced the Korean smartphone maker was for sale. Several overseas and Korean companies filed letters of intent to acquire the smartphone maker, but no offer was received.

While it had been expected the new owner of Pantech would be announced Feb. 17, One Value Asset Management could not meet administrative requirements related to the sale.

In order for the U.S. asset manager to invest in a domestic business, it must report its foreign investment to either commercial banks or the Korea Trade-Investment Promotion Agency.

The court characterized it as minor administrative requirements the U.S. company had to fulfill, adding that the delay was not a serious threat to the acquisition.

Industry observers predict the Korean smartphone company will be sold for about 100 billion won ($90 million).

The American asset management company plans to recall most Pantech employees, who have been on paid leave, and hire casual workers as permanent employees.

One Value Asset will assume management rights, while the others will participate as financial investors.

If the acquisition proceeds as planned, Pantech is expected to resume normal business activities as early as April.

When One Value Asset Management pays the deposit and provides a plan to normalize operations of the company, the court will decide whether to authorize the sale.

However, there is a requirement that the business recovery plan be submitted within four months of Dec. 5, 2014, when the first meeting of related parties was held. To meet that deadline, procedures for the takeover need to be finalized in March.

“If current plans go without a hitch, the second assembly of related parties, including creditors of Pantech, will be held before April,” said a court official. “Later, when the court accepts the normalization plan, Pantech’s court receivership will eventually be concluded.”

After the acquisition of Pantech is achieved, One Value Asset Management is believed to be planning to break into the Chinese and Indian markets through strategic partnerships with Chinese companies.

One Value Asset Management also has suggested a blueprint for expanding into the Chinese market by cooperating with an affiliate of Alibaba, the largest online commerce company in China.

Pantech, established in 1991, was hailed as a success story because its founder, Park Byeong-Yeop, was an ordinary salary man who created the mobile phone company with only 40 million won while taking over several conglomerate-backed mobile companies.

However, in recent years, particularly since the global crisis and the development of the smartphone, Pantech has been struggling to reclaim its former glory.