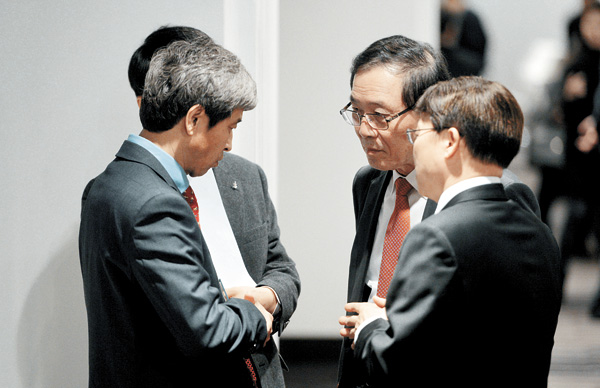 Ahn Choong-young, chairman of Korean National Commission for Corporate Partnership, second from right, confers with members of the commission before a meeting Tuesday at the Palace Hotel in Banpo-dong, southern Seoul. [NEWSIS]

Starting this year, conglomerates can produce and export makgeolli (Korean rice wine) if it is produced jointly with small and midsize businesses.

“With the Korea-China Free Trade Agreement taking in effect within the year, opportunities for Korean small and midsize enterprises will be wide open in the Chinese domestic market,” said Chairman Ahn Choong-young at the commission’s plenary meeting Tuesday at the Palace Hotel in Banpo-dong, southern Seoul. “The commission hopes to assist small businesses going abroad and enter the markets by cooperating upon the retail and business networks already pioneered by conglomerates.”

Along with makgeolli, the commission identified 20 other products eligible to be produced jointly for export by conglomerates and small or midsize businesses. They include laundry soap, tailored suits and LED lightbulbs 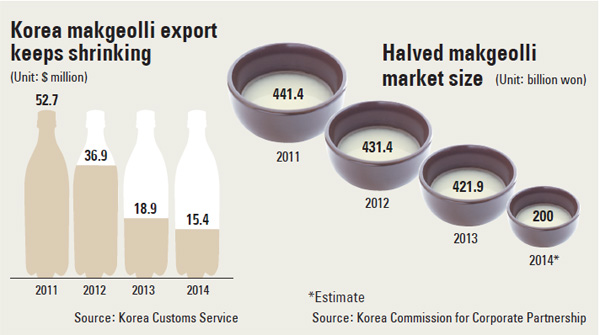 This year, the commission selected small businesses that produce 54 products - including tofu, business-to-business coffee, soy sauce, gochujang (red pepper paste), rice cakes and stationery products - to be protected from unrestricted competition for three years. The protection can be extended only for an additional three years.

The state-run commission and SME-only business item policy were launched as the Global Financial Crisis of 2008 started to drag down overall growth of the Korean economy and of small businesses in particular.

For the next three years, the lifting of the ban allows conglomerates to pursue joint R&D projects and exploration of export markets.

Conglomerates will remain prohibited from producing rice wine products for domestic retail and be strictly limited to R&D and marketing projects with the small breweries.

The commission hopes this will help small makgeolli makers, who suffered falling exports to Japan as bilateral relations worsened over the past few years.

Korean makgeolli exports to Japan reached a record high of $48.4 million in 2011, but experienced a sudden slump in the following year at $32 million. This kept dropping to reach only $9.1 million last year.

Japan’s loss of interest in the Korean traditional liquor resulted in the steady decline of overall makgeolli exports to $18.9 million in 2013 and $15.4 million last year.

According to the Korea Customs Service, makgeolli exports were as high as $52.7 million in 2011 during the Lee Myung-bak administration, thanks in part to the close relations with Japan maintained by the former president.

However, exports fell to $36.9 million in 2012, the year when Lee made an unexpected visit to the Dokdo islets and relations soured.

“The commission decided to allow conglomerates into 21 business sectors, including makgeolli, in a limited manner of only allowing joint business,” said Ahn. “This method will better help small businesses in these sectors than simply protecting them from free competition, because collaboration with conglomerates will help small companies gain the ability to stand on their own.”