Choi announces return to the ring

Choi announces return to the ring 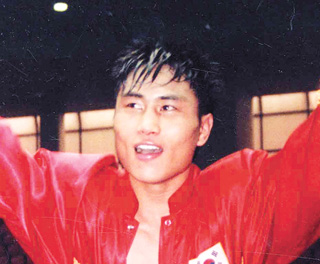 Former World Boxing Association super-featherweight (130 pounds or under) Choi Yong-soo will return to the ring at the age of 42, the Korea Boxing Commission said on Wednesday.

“Choi had no problem in medical tests earlier this month,” a KBC official said. “He called WBC on Monday and said he will register by this week.”

Choi, who turned professional in 1990, was one of the top Korean boxers in the late ’90s. After taking the Korean and Oriental and Pacific Boxing Federation super-featherweight titles in 1993, he started boxing internationally and became the WBA super-featherweight champion in 1995 by beating Argentina’s Victor Hugo Paz by TKO in round 10.

The Dangjin-born boxer defended the belt seven times before losing to Japan’s Takanori Hatakeyama in 1998 by decision. Choi got the chance to reclaim the super-featherweight title in a 2003 World Boxing Council fight against Thailand’s Sirimongkol Singwangcha, but lost by decision.

He hung up his gloves after the fight, ending his career with 29 wins (19 KOs), one draw and four losses.

In 2006, Choi did return to the ring, not as a boxer, but as mixed martial arts (MMA) fighter. In K-1, he started with three consecutive wins, but lost to Japan’s Kobayashi Masato in 2007 and quit MMA. Since then, he has been running his own boxing gym and promoting matches.

Choi said he wanted to return to boxing in order to give hope to middle-aged men like him.

“Korea’s middle-aged men are having a tough time both at work and at home, so I wanted to give them confidence that we can still do something,” he said. “I also left the ring as a K-1 fighter, but I wanted to retire as a boxer and that’s why I’m going to try putting on my gloves again.”

KBC said that Choi will soon sign a promotional deal and is likely to have a fight in August. It has not been determined who will be his opponent, but it is expected to be Japanese or Korean boxer.

“Choi was Korea’s top boxer in the 1990s with his aggressive fighting,” said KBC Chairman Hong Soo-hwan, who is a former WBA bantamweight and super-bantamweight champion. “He has a good reputation in the boxing community for his pleasant personality. We will make the best effort to help him with his comeback.”

“I will try to give new energy to Korean boxing, which has been struggling,” Choi said.