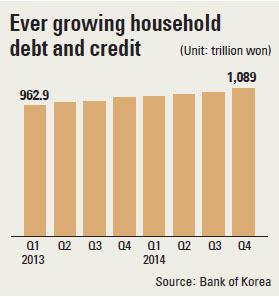 Debt saw particularly significant growth in the last three months of 2014 as it added 29.8 trillion won compared to the previous quarter. That was the largest amount of new debt ever in a quarter. The old record was 27.7 trillion won added in the fourth quarter of 2013.

While growing steadily for the past few years, household debt gained momentum since the second half of last year when the BOK cut the key interest rate in August and October to its all-time low of 2 percent to encourage spending.

The central government’s easing of real estate regulations - particularly ones related to loan restrictions such as debt-to-income and loan-to-value ratios - contributed to the significant growth of mortgage debt.

Although the continuous expansion of debt hasn’t imposed immediate stress on the Korean economy largely thanks to the low interest rate, it has been considered a major risk to the nation’s financial industry.

Yet the financial authority has downplayed the threat.

“The household debt to disposable income ratio, which is an indicator of households’ debt burden, at the end of 2013 was 160.7 percent, which is relatively high compared to major advanced economies, including the United States,” said Kim Yong-beom, director general of the financial policy bureau at the Financial Services Commission. “But the financial debt to financial asset ratio is holding steady at 46 percent. The government has been making persistent efforts to reform the structure of mortgage loans.”