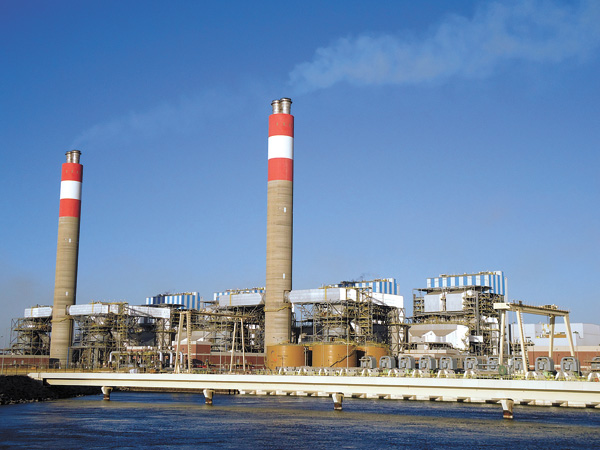 A full view of Doosan’s power plant in Rabigh, Saudi Arabia. Provided by the company

Doosan Group, the oldest conglomerate in the nation, welcomed in the New Year by highlighting its ambitions for the future. Getting satisfactory results from core business investments, fortifying teamwork, increasing market share and staying attentive toward new technology are all at the top of the company’s agenda.

In fact, during the first week of January, Doosan Heavy Industries and Construction set foot into Kazakhstan with a newly signed thermal power plant contract. The deal, worth 340 billion won ($307 million), was made with the partner Karabatan Utility Solutions. The plant will then provide electricity for the region of Atyrau near the Caspian Sea, where it is situated and large-scale petrochemical facilities are expected to be established in the future.

Doosan Corporation, a major subsidiary of Doosan Group, also announced last July their merge with Fuel Cell Power, a housing fuel cell provider in the Korean domestic market. The ensuing acquisition of American corporation ClearEdge Power, another owner of original fuel cell technologies, has also contributed to the corporation gaining technologies necessary for the fuel cell business. This newly spotlighted ecofriendly energy source is a device that allows chemical energy from fuel to turn into electricity through a chemical reaction. The market for the fuel cell industry is expected to grow at an average rate of 30 percent per year, leading to a value of 40 trillion won by 2023.

Doosan has also been at the head of innovation on the domestic level. The manufacturing industry as we knew it has converged with Information and Communication Technology. Doosan Heavy Industries and Construction originally founded a remote monitoring service center in Changwon, the city of its home plant. In its Seoul office, a software center has been newly established. The two centers will collaborate to heighten the level of plant use and efficiency, with Big Data as the key technology. Furthermore, Doosan Infracore released a 38-ton DX380LC-3 excavator in 2013, a machine that utilizes the innovative technology of D-ECOPOWER. This allows the excavator to use the optimal amount of oil and power, leading to better efficiency while lowering the level of fuel consumption.

In words of encouragement for “Team Doosan,” the company Chairman Park Yong-maan said in his New Year greetings that, “The world economy is slowly recovering. In other words, now is the time for action. In the upcoming year, future technology’s significance should be especially recognized. We should approach the topic with the perspective that it is bound to affect us some way, somehow.”