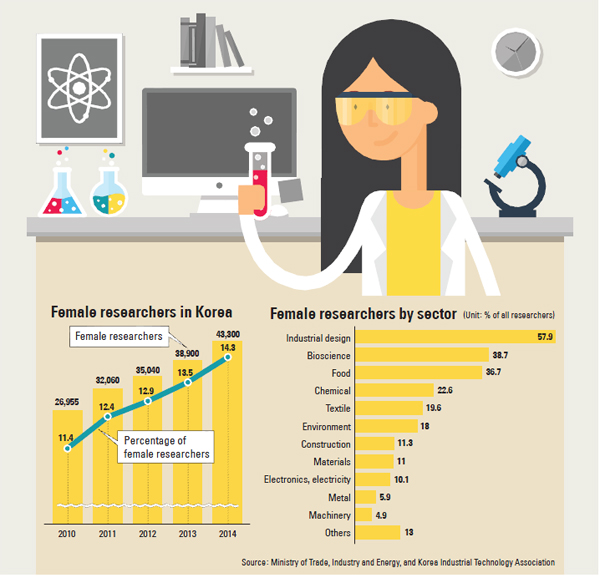 The government on Friday said it would fund day care centers at state-run technology and industrial parks and would give priority on bids for R&D projects to companies where more than 20 percent of the researchers are female or that have a female CEO.

The move is part of the government’s effort to boost the nation’s tech research by bringing highly-educated mothers who put their careers on hold back into the workforce.

According to the Ministry of Trade, Industry and Energy, female researchers only accounted for 14.3 percent of researchers last year, or 43,300. The percentage has steadily grown from 11.4 percent in 2010.

The ministry hopes to boost the number of women researchers to 50,000 by the end of next year, which it also said would boost household incomes and help make up for the chronic talent shortage at small technology companies.

The government said it would spend 10 billion won ($9.1 million) this year on R&D projects pitched by companies with a female CEO or a company that has committed to opening a day care center.

As the first step in the project, representatives from five ministries on Friday attended a groundbreaking ceremony for a day care center that the government is partially funding at the Gyeonggi Techno Park in Ansan, southern Gyeonggi. It will be the first state-funded day care center at an industrial park and is scheduled to open in September. Some 25 tech companies, including LG Innotek and JiinTech, formed a consortium to fund the center’s operations.

“Bringing female researchers back into the workforce is one of the most basic elements required for Korea to advance as a leading technology country and to revive our economy,” Yoon Sang-jick, minister of trade, industry and energy, said at the ceremony.

Since 2013, the Park Geun-hye administration has focused on boosting Korea’s economic competitiveness by encouraging mothers to work. One of its strategies was to promote part-time jobs with flexible hours for mothers and encouraging fathers to take a partially-paid childcare leave.

In a bid to push fathers to take leave, last year the government amended the labor law to allow them to take two years of leave, raising the monthly child care salary to 60 percent of a base salary.

However, the government concluded that its methods were not boosting female employment. So, starting this year, small and midsize companies operating in an industrial park will be required to hire women for at least 30 percent of their master’s and doctorate-level positions.

The central government will also open four more day care centers, capable of caring for 80 children each, at industrial parks in Seoul, Incheon, Ulsan and Pohang, North Gyeongsang. The government said it will cover 68 percent of the operations and day care costs, in order to limit the financial burden on small and midsize employers.

According to the trade ministry, the number of female researchers per company varied depending on the field of research. At industrial design, bio and food companies - mostly based in Seoul and Gyeonggi ? about 30 percent of the researchers were women. Meanwhile, electronics, steels and machinery manufacturers - many of which are located in the southern part of the country - had only about 10 percent female researchers.