It is no exaggeration to say Jin Jong-oh is officially the best in the world. In January, he was selected as the 2014 Player of the Year by the International Shooting Sport Federation - his second time to nab the prestigious award since 2008.

Just like the Ballon d’Or winner is selected through voting from each national team’s manager and captain, along with sports reporters, the ISSF’s Player of the Year is selected in a similar way.

It gathers votes from members of the ISSF Athletes Committee, the ISSF Coaches Advisory Committee and a panel of international sports journalists.

Jin, 35, received 113 points, claiming the title over Russia’s Nazar Louginets and China’s Yang Haoran. Last year, he took the gold medal in both the 10-meter air pistol and the 50-meter pistol at the 2014 ISSF World Championship in Granada, Spain.

Jin broke the 34-year-old 50-meter pistol world record of 581 points set by Alexander Melentiev, who represented the former USSR at the Moscow Olympic Games in 1980 with 583 points.

The Gangwon-born shooter also holds the world record in the 10-meter air pistol with his score of 594 at the Changwon World Cup in Korea in 2009. He is currently placed No. 1 in both categories.

Jin, who started shooting in 1995, has collected the most gold medals in his field in the Olympics, along with Germany’s Ralf Schumann.

Despite his success, Jin is not laying down his pistol. Last Wednesday he was still aiming for the target at the Gyeonggido Shooting Range in Hwaseong, Gyeonggi.

“Since I’m not a god but a normal person, I can’t stop practicing,” he said.

For the upcoming Olympics in Brazil in 2016, Jin said he aims to win another medal. If he succeeds he will become the only Korean to claim a medal in four consecutive Olympics. 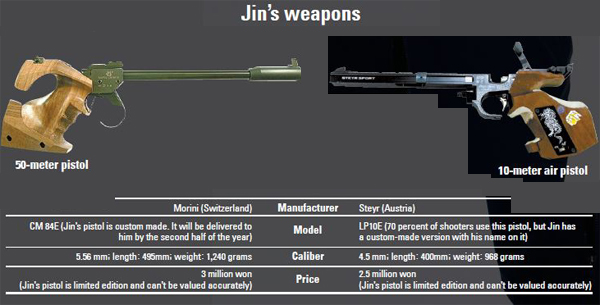 Q. How did you feel when you broke the 50-meter pistol world record?

A. The record set by Melentiev was the oldest remaining world record in the ISSF. After I broke it I received a congratulatory message from Melentiev. It was so sad to hear that he recently passed away.

Why did you travel to Europe in January?

When I set the 50-meter pistol world record I used a gun manufactured by Switzerland’s Morini. The shooters’ pistol changes with the trend. As the company saw my performance could help them with their advertising, it invited me to Lugano, Switzerland, and gave me a pistol designed just for me. I also have a customized 10-meter air pistol from Austria’s Steyr. Both are unique.

How do you feel about fellow shooters calling you the “God of Shooting”?

I’m just normal person. When I set the 50-meter pistol world record, there were lots of thoughts going through my head.

After hurting my right shoulder during a football match in college, I had to have a metal pin put into my shoulder, which still makes it difficult for me to practice for a long time. So, I concentrated on each shot instead of how much time and bullets you fire every day. My philosophy in shooting is still same: your game isn’t decided in 60 bullets but by each of your shots.

In the Asian Games last year you saw high school student Kim Chung-yong winning the gold in the 10-meter air pistol. How did you feel?

Back then I had a severe cold. I think the result was God’s command for me to not retire. After the event, I told Kim that a new hero had been born.

As younger shooters are rising, I will reveal my personal know-how, routines and mind control monologues after I become a coach [laughs].

How do you get rid of stress?

I feel like being an old man after I finish the event. I’m from Chuncheon, Gangwon, and have enjoyed fishing since I was 10 years old. Just like shooting, fishing needs concentration and patience. I also watch movies with gunfights. In fact, my dream was to be a sniper when I was with the police athletic team.

What’s your plan for the Rio Olympics next year?

I first want to pass the national team selection competition and claim four consecutive Olympic gold medals. It’s really meaningful to get a medal in four straight Olympics. It makes me greedy, but I’m trying to clear my thoughts.

After the Olympics, I want to pursue my career as an International Olympic Committee athlete member.