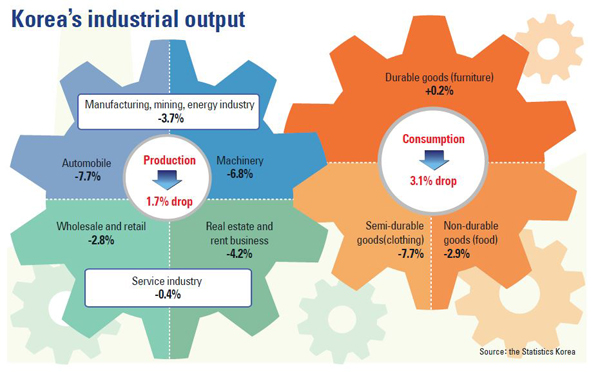 Korea’s industrial production fell 1.7 percent in January from a month earlier, the sharpest drop over the past 22 months, a government report said. It was affected by shrinking retail sales, including cigarettes.

According to Statistics Korea’s monthly report released on Monday, the seasonally adjusted industrial output of Korea in January dropped at the sharpest rate since March 2013, when Korea recorded a minus 1.8 percent rate of growth in production.

Output in the manufacturing, mining, electricity and gas industries shrank by 3.7 percent, the biggest fall since December 2007. The automobile industry fell 7.7 percent, while machinery equipment was down 6.8 percent.

Retail sales also fell by 3.1 percent compared with a month earlier. Consumption of durable goods such as furniture sank 0.2 percent, while non-durable goods, such as food, fell 2.9 percent.

“A drop in mining and manufacturing industry output is because of a low-base effect, as many auto manufacturers usually produce more automobiles at the end of the year and take a two-day holiday for Lunar New Year,” a government official told reporters at a briefing.

The plunge in the services industry was mainly due to calendar effects, Statistics Korea said in the report, with the Lunar New Year holidays moving from January to February this year.

“The increase in cigarette prices and warmer weather and the calendar effects of the Lunar New Year holidays were all temporary factors translating into slow demand for food and clothing,” the government official said.

Investment in facilities also edged down by 7.1 percent compared with January, the report said, largely in automobiles and general machinery.

The government dismissed concerns of deflation with the falling industrial output, saying the negative growth rates would be temporary and turn around soon.

“The decrease in trade in February was mainly due to the Lunar New Year holidays and falling oil prices,” an analysis by the Ministry of Strategy and Finance said on Monday. “We don’t see this as an example of ‘recessionary surplus.’”

When it comes to low consumer prices, the report said, “Low prices are basically affected by a drop in oil prices and agricultural products. We can’t say this is deflation yet.”

Concerns are mounting that Asia’s fourth-largest economy may be slipping toward recession after Korea’s exports and imports fell in February.

Falling global oil prices and a strong won led exports and imports to drop, but the imports dipped at a faster rate than exports, resulting in an unprecedented trade surplus in February of $7.7 billion.

According to statistics released by the Ministry of Trade, Industry and Energy on Sunday, Korea’s February exports stood at $41.5 billion and imports were $33.8 billion.

“Although imports of raw materials were reduced at a sharp rate, imports of capital and consumer goods are increasing,” the analysis by the Strategy Ministry said. “The manufacturing industry will also bounce back, seen in an increase in its February output to $2.18 billion from $1.92 billion. If you combine figures for December and January, the output of manufacturing and mining rose 1.6 percent compared to the previous two months, so we see industry as rebounding.”

Regarding the BOK’s policy on interest rates, a Strategy Ministry official said, “In general, economics say lowering the interest rate would be helpful for economic growth. We will follow the BOK’s judgment.”